The Litecoin price re-entered the $120 psychological level this Thursday and is currently hovering around $125. Prior to that, between July 12 and July 20, Litecoin price crashed from $134 to $107, after encountering resistance at the 20-day SMA. Let’s take a closer look at what happened next.

Litecoin Price Has Red Sessions After 4 Bullish Ones

Between July 21 and July 24, the Litecoin price jumped from $107 to $126.35, with four straight bullish sessions. However, the 20-day SMA has decided to act spoilsport again to prevent the upward momentum. This Sunday, LTC has dropped to $125. Due to the recent jump, Litecoin has reversed from red to green.

Looking at Into The Block’s IOMAP, the Litecoin price faces strong resistance at $130. As per the IOMAP, nearly 120,000 addresses had purchased almost 2.3 million LTC tokens here. 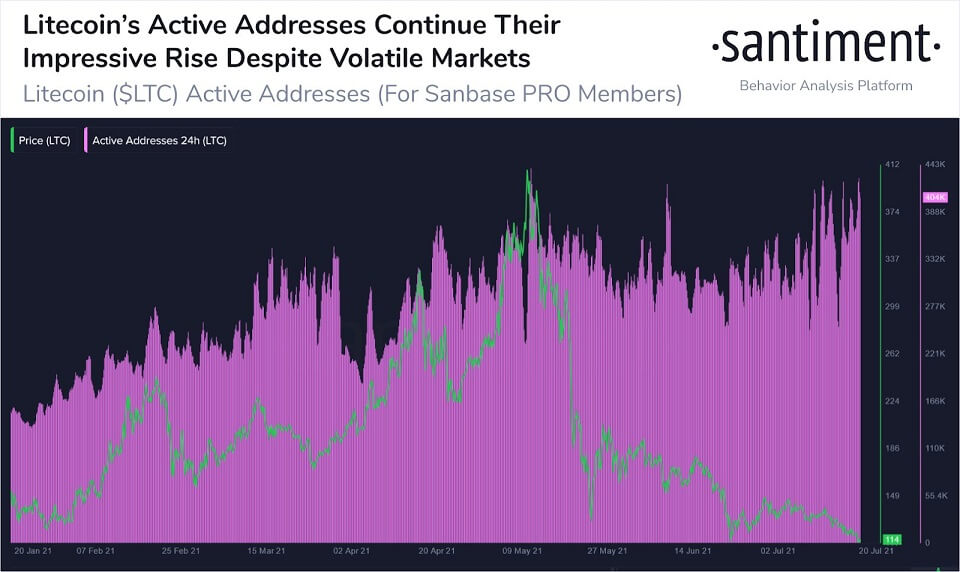 “#Litecoin is up a modest +3.8% and appears to have a lot of positive signs going on behind the metric curtains currently, including $LTC really hitting its highest active address day since its #AllTimeHigh. ”

Litecoin, one of the top cryptocurrencies in the world, has many use cases. Investors are also increasingly buying LTC. But does LTC have any real-life applications and use cases? In the past, Litecoin creator Charlie Lee has spoken up about the use cases of the token.

Charlie Lee opined that the biggest use case for LTC is speculation and store of value. He also felt that it is going to be that way for a while. However, he clarified in the past that they were aiming to move more towards payments. To be able to spend the coins instead of just holding onto them as a store of value.

He acknowledged how liquidity was very important to get Litecoin into the hands of people to use it. And the goal is for it to be money.

“Where you store your value, and you also use it to purchase goods.”

Talking about DeFi and decentralization, Charlie Lee stated that interest-earning is also essential for Litecoin LTC holders. He noted that it was essential to park money and still be able to generate value from it.

He has also expressed his strong opinions on DeFi and on what that means and how impactful it could be, compared to mainstream finance and related views.

When Litecoin price overcomes the 20-day SMA and the $130 barrier, it should touch the 50-day SMA ($150) and reverse the parabolic SAR from negative to positive.