After an extremely bearish week, the Litecoin price stabilized and recovered over the weekend, pushing back up towards the 20-day SMA. However, LTC fell back into the red on Monday and went through a volatile trading session, where the price reached a high of $239, a low of $167, and the current price hovering at around $182. The volatility was brought about with the announcement that Walmart would begin accepting crypto payments in Litecoin, resulting in a huge price spike. However, after Walmart confirmed that the news was fake, LTC saw a massive drop in price.

After a bullish start to September that saw the Litecoin price rise by over 16% on 3rd September and further by over 9.58% on 5th September, LTC started the previous week on an extremely bearish note. After ending Sunday at $232.33, LTC fell by around 5% on Monday, falling down to $219.54. Tuesday saw an even bigger fall, with LTC falling by over 18%, slipping below the 200-day SMA, the 20-day SMA, and $200 level to end the session at $178.37. The price did not see much movement on Wednesday and Thursday, rising only marginally. However, Friday saw another drop, with the price falling to $174.01. 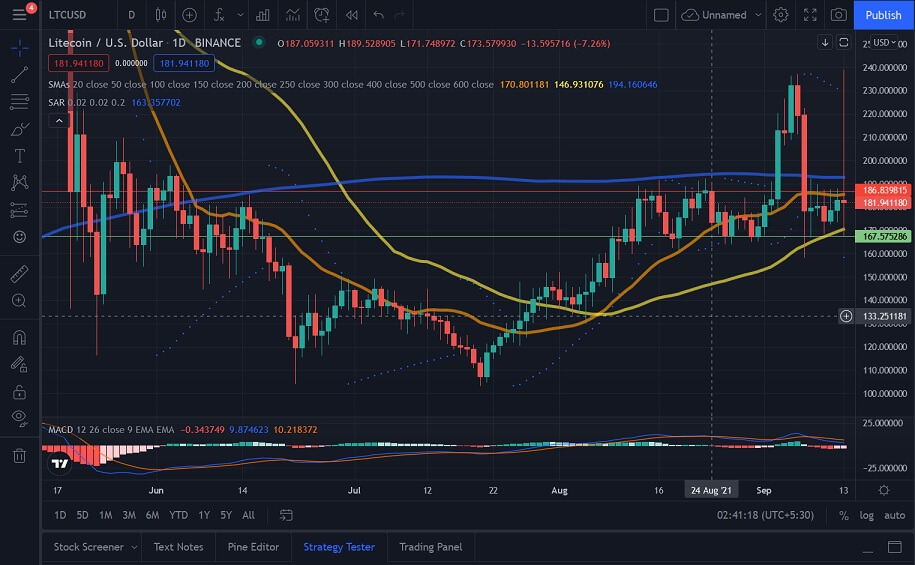 However, despite a bearish Friday, the Litecoin price staged a recovery on Saturday, with the price rising by 2.59% to settle at $178.58. Sunday saw LTC start in the green once more, rising by over 2.56% to settle at $183.14. With the 20-day SMA acting as resistance, the price could not push higher. Monday saw an extremely volatile session thanks to the Walmart announcement. LTC went as high as $239 at one point and also saw a low of $167.77. Currently, LTC has recovered and is currently at $182. Looking at the MACD, we can see that it is bearish. However, If LTC can push past the 20-day SMA, we could see it flip to bullish. The Parabolic SAR is already showing as bullish.

Looking at the 1-hour Litecoin price chart, we can see that LTC had slipped under 20-bar SMA and the 50-bar SMA on the 13th, with the price dropping down to $172.31 before recovering and pushing up to $175.52. We can also see two significant candles, one green, and one red. The massive spike in price that we can see on the chart was a result of a rumor or false announcement that Walmart would be accepting crypto payments in Litecoin. This announcement started a frenzy with everyone wanting to buy Litecoin. This led to an incredible surge of 25% during the session, taking the price as high as $237.03. However, Walmart clarified that the news was not true, and we saw a massive sell-off, which resulted in LTC falling by over 18% in the subsequent session. LTC has stabilized after that period of increased activity and is currently at around the $181 level. With both the MACD and the Parabolic SAR currently bullish, we could see the price rise during the current session. 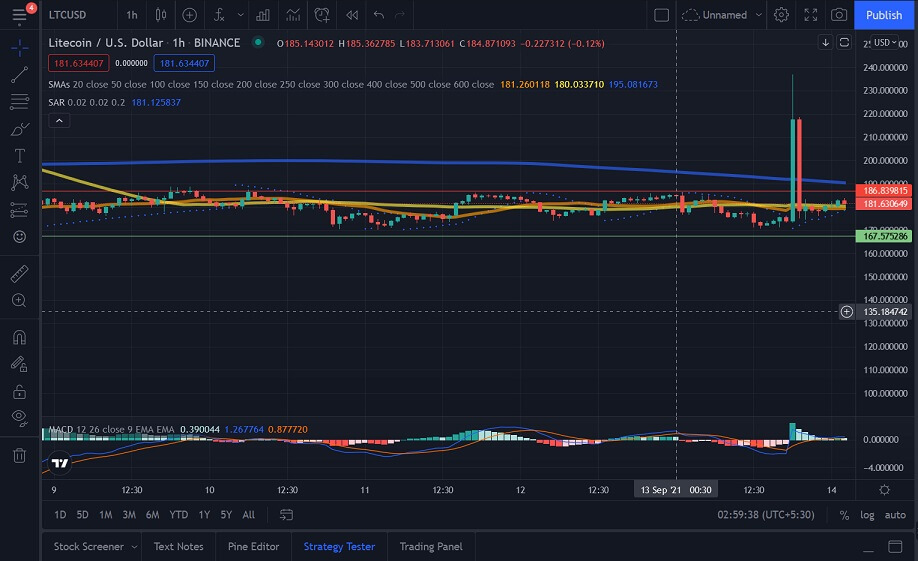 Grayscale Investments recently revealed that three trusts have been filed with the Securities and Exchange Commission (SEC) to become SEC reporting companies. The three trusts include individual crypto asset products such as the Bitcoin Cash trust, the Litecoin trust, and the Ethereum Classic trust, which will join three other Grayscale trusts that are already SEC reporting companies.

The digital currency asset manager stated that the trusts’ “product development pipeline” was described in a blog post Grayscale published last April. The blog post, called “Grayscale’s Intentions for a Bitcoin ETF,” mostly discussed the firm’s Bitcoin-based trust, but it said it would “ultimately convert each product into a digital currency ETF.”

Grayscale commanding six crypto trusts is a milestone, according to Grayscale's Craig Salm. He reportedly said:

As we await regulatory approval for a Bitcoin ETF, we remain focused on providing investors with opportunities to access the digital currency ecosystem through Grayscale’s secure, trusted family of products."

Per SEC, the LTC, BCH, and ETC trusts will need to file additional reports and provide more financial statements. The trusts must follow all the rules under the US Exchange Act (SEA) and file a Form 8-K.

Looking at the Litecoin price chart, we can see that LTC is back in the red after posting a slight recovery over the weekend. The current session has been highly volatile, and currently, both buyers and sellers are trying to take over the market. If buyers can take control of the market, we could see the price move up towards $180, pushing past the 20-day SMA. However, if the sellers take control, the price could fall towards the $50-day SMA.