Maker’s uptrend continues to hit new milestones, with gains likely to continue in the near term. A historical high has been traded at $5,686 as bulls look forward to lifting to $10,000. The least resistance path is upward according to the transaction history on-chain model.

The token is trading at $5,454 at the time of writing. Despite the retreat from the recent high, the least resistance path is upward. Currently, $5,000 functions as the immediate support, thereby securing the uptrend. On the upside, bull gaze at $6,000 to begin the next phase for gains eyeing $10,000.

A golden cross pattern has recently formed on the four-hour chart after the 50 Simple Moving Average (SMA) crosses above the 100 SMA. A golden cross is a highly bullish formation. It confirms to the investors that the path with minor hurdles is north.

While the golden cross does not signify entry positions or targets, it tells the trader to be on the lookout for entry points. 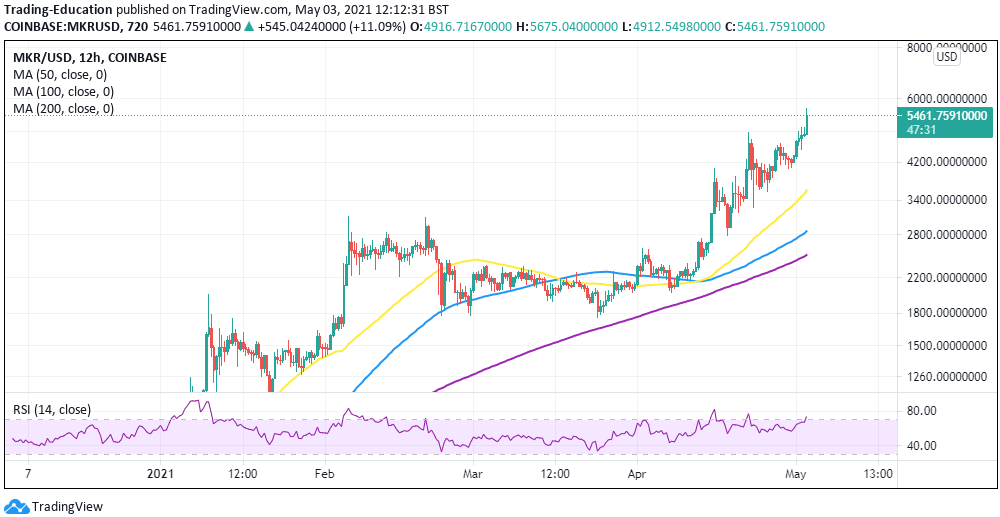 The IOMAP model by IntoTheBlock (ITB) cements the buyers’ influence over the price by revealing the absence of a defined resistance zone. Trading above the historical high or closing the day above $6,000 will make the journey to $10,000 a walk in the park.

On the flip side, Maker is sitting on vital support areas, in turn, adding credibility to the bullish notion. The model directs attention to the range between $4,812 and $4,855. Here, roughly 386 addresses are currently profiting from the approximately 8,300 MKR bought in the zone. In other words, this support area seems strong enough to hold Maker in the short term.

It is worth mentioning that Maker is already overbought as per the Relative Strength Index (RSI). In other words, the token is trading above its actual market value; therefore, a correction may occur. If support at $5,000 fails to hold, MKR will freefall toward the primary anchor at $4,200.