Maker's value has grown significantly since the beginning of the year. The move to complete decentralization has also positively impacted the price, as earlier reported. Demand for MKR continues to grow as the community seeks the right to take part in the voting process. The project's foundation has prepared proposals that must be voted in before implementation.

The four-hour chart shows the formation of an ascending triangle. This is a bullish continuation pattern that usually forms amid an uptrend. As the pattern develops, a period of consolidation dominates. However, a breakout occurs before the trend lines converge.

Maker has pulled above the upper trend line (x-axis) and commenced the breakout move. Usually, triangles have precise breakout targets measured from the highest to lowest points. For instance, Maker's ongoing upswing prepares for a 64% stride to $6,430, as illustrated on the chart. 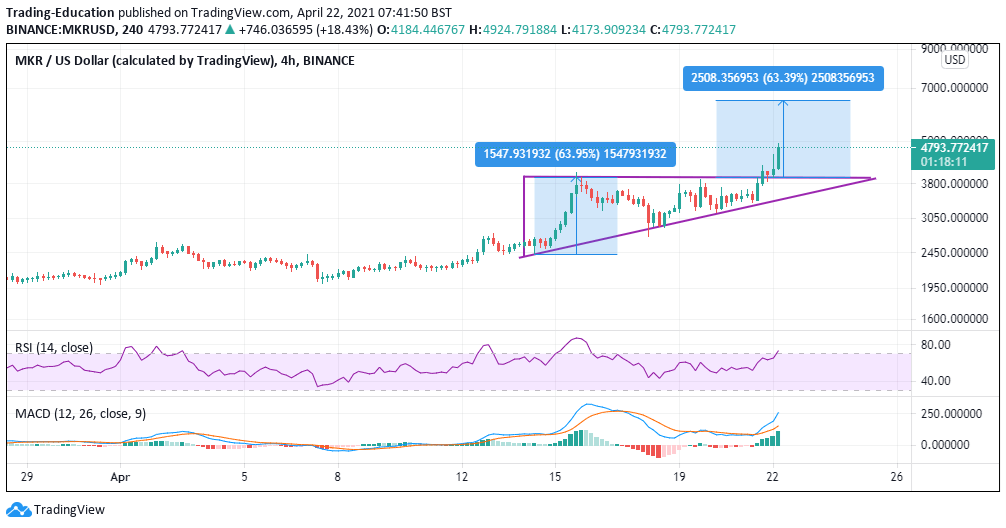 The Relative Strength Index (RSI) on the four-hour chart reinforces the bullish narrative after lifting from the midline region into the overbought territory. At the time of writing, MKR trades at $4,731 as bulls strengthen the grip on the price.

The uptrend was validated by the Moving Average Convergence Divergence (MACD) indicator. A vast divergence above the signal line implies that buyers are in control. If the technical picture remains unchanged, Maker will close the gap heading to the triangle breakout target at $6,430.

Maker still has one crucial milestone to achieve ahead of the lift to $6,430. This is to secure the position above the critical $5,000. Note that massive buy orders are likely to be triggered as soon as the price steps past this zone.

However, if buyers fail to claim the $5,000 level, losses will likely come into the picture amid a rising overhead pressure. On the downside, the bearish leg may extend to $4,000, but if push comes to shove, we can expect declines to retest support at $3,050 and $2,450, respectively.

Maker
MKR
Top Brokers in
All Regulated Brokers
67% of retail clients lose money when trading CFDs with this provider.