Polygon was not spared by the bearish wave across the market this week. The declines from highs of $2.4 continued to wreak havoc, leaving most investors at a loss. Support expected at the 200 Simple Moving Average (SMA) did little to stop the losses. The bearish leg stretched to $1.3 before stability returned and bulls took over.

At the time of writing, MATIC is doddering at $1.45. The least resistance path seems upward based on the key chart pattern and short-term technical indicators. Establishing support at $1.4 would be crucial to the gradual bullish momentum.

The four-hour chart illustrates a falling wedge pattern. This is a bullish formation mainly appearing during downtrends. Two trend lines form this pattern, connecting a series of decreasing tops and lows.

The pattern is distinct because it contracts downward as the trading range narrows. As the gap between the trend lines reduces, low trading volume is witnessed. Unlike symmetrical triangles, which have no bearish or bullish biases, a falling wedge pattern usually leads to a significant breakout.

Note that the upper trendline (resistance) and the lower trendline (support) converge as the pattern matures. A spike in trading volume accompanies a breakout at the resistance. The breakout target is precise, measured from the highest to lowest points of the pattern.

For instance, if the wedge pattern on Polygon’s chart matures, we expect the breakout to catapult the price to $2.3. Gains of this magnitude will likely call more buyers into the market, thereby pushing the bullish leg to new all-time highs, perhaps above $3. 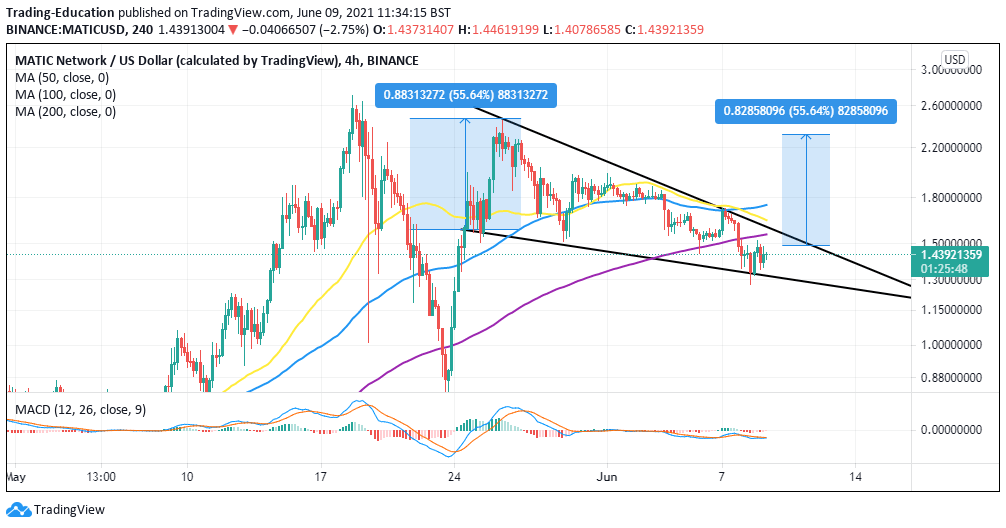 Looming at the other side of the fence

The In/Out of the Money Around Price (IOMAP) by IntoTheBlock shows a host of resistance zones ahead of Polygon. However, the most robust lies between $1.52 and $1.57. Here, roughly 4,500 addresses previously bought approximately 82.5 million MATIC. The seller congestion in this area alongside other relatively strong hurdles may limit the expected uplift.