MATIC price closed the day below $1 after holding above this level for several weeks. After the uptrend proved challenging to sustain, most buyers retreated, allowing selling pressure to continue. At the time of writing, Polygon is trading at $0.96 amid an increasingly bearish outlook accentuated by a descending triangle pattern.

Community Gaming has announced a partnership with Polygon to offer developers in the industry optimum scalability to create eSports tournaments. This means that new tournaments will be powered by Community Gaming but deployed on the Polygon smart contract platform.

Developers find it very easy to create tournaments on Community Gaming. With a highly scalable blockchain platform in play, players, organizers, and developers will have access to the required tools to create outstanding eSports tournaments.

Polygon is trading at $0.97 after failing to hold support above $1. A vivid bearish formation appeared in a descending triangle pattern as observed on the four-hour chart. This pattern is highly bearish and often results in a significant loss.

A couple of trend lines create the descending triangle, connecting the consecutive declining peaks and the relatively equal lows. MATIC recorded a massive increase in volume as the pattern began forming but diminished as the pattern narrowed.

Polygon’s break under the horizontal line (x-axis) supports the descending triangle target, preparing for a colossal dip to $0.82. A daily close under $1 will validate the downswing. 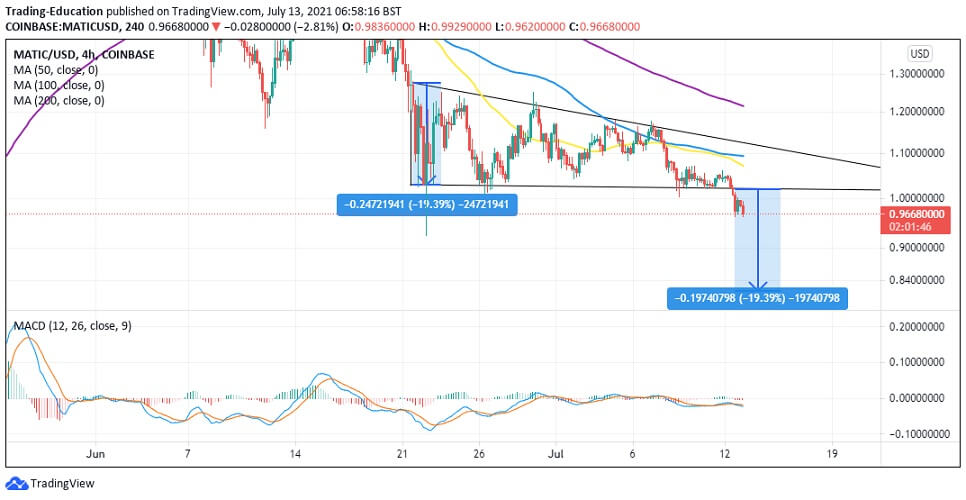 The Moving Average Convergence Divergence (MACD) adds credence to the bearish narrative. A selling signal recently occurred when the 12-day exponential moving average EMA) crossed beneath the 26-day EMA. Additionally, if the MACD sticks beneath the mean line, we expect losses to continue in the near term.

It is worth mentioning that the downfall for $0.82 will be sabotaged if Polygon closes the day above $1. With robust support in place, more investors will return to the market, paving the way for gains toward $2.