MATIC Price Forecast: Polygon Blasts Out of the Woods, Closing the Gap Toward $2

Polygon is finally out of the woods, especially with support at $1.2, bolstering the price upward. Several resistance levels have been pushed into the rearview, including the 50 Simple Moving Average (SMA), $1.5, and the 100 SMA.

In the meantime, Polygon trades at $1.64 while bulls battle the seller congestion at the 200 SMA on the four-hour chart. If technical levels remain intact, the bullish building momentum will push MATIC to $1.8 and $2, respectively.

Will MATIC price sustain the uptrend to $2?

It is worth mentioning that settling above the 200 SMA will encourage more buyers to join the market. The resistance at $1.8 seems like the only formidable barrier to gains aiming for $2.

Subsequently, the Moving Average Convergence Divergence (MACD) indicator has a bullish impulse, adding weight to the uptrend. As the momentum indicator settles above the zero line, Polygon’s foundation solidifies. Realize that a stable market allows bulls to focus on recovery and not play defense tactics.

Similarly, the MACD line recently crossed above the signal line, bringing to light a call to buy. As the divergence between these two lines expands, the upswing to $2 becomes more apparent, notwithstanding the resistance at $1.8. 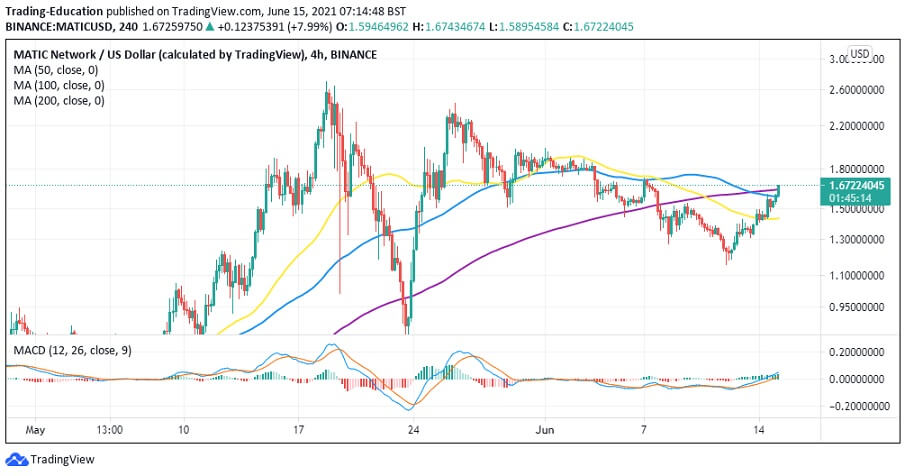 The on-chain front has not been left behind but seems to be improving with the strengthening technical levels. According to the “Daily Active Addresses” metric by IntoTheBlock, the active addresses interacting on the network have been growing gradually since June 11. At the time of writing, 9,900 addresses actively transact on the MATIC network compared to 7,850 recorded on June 11.

High network activity is a bullish signal since it positively impacts speculation levels in the community. In other words, as more users come in, investors are encouraged to increase their stakes while anticipating a breakout to higher price levels.

The number of new addresses has also gone up in the last few days, from 4,000 on June 11 to the prevailing 5,250 per day. A spike in this metric shows that the project is gaining traction in adoption, which has a ripple effect on the token value.

Realize that failure to settle above $1.8 would lead to an increase in selling pressure, sabotaging or delaying the upswing to $2. On the downside, support is expected at the 200 SMA, $1.5, and the primary buyer congestion zone at $1.2.