MATIC price trades at $1.47 after retracing from the recent barrier at $1.7. The failure to close the day above $1.6 added gasoline to the bearish fire as Polygon lost more ground.

MATIC holds at the 50 Simple Moving Average (SMA) on the four-hour chart at the time of writing. Several short-term technical indicators foresee another drop in the price, especially if Polygon makes a four-hour close below this crucial support.

Is MATIC Price Primed For A Dip?

The four-hour chart reveals several bearish signals, starting with the Relative Strength Index (RSI). This is a technical chart overlay tool used to identify the exact direction of the trend and measures the strength of either the bulls or the bears.

For now, the RSI has slipped under the midline, hinting at the downtrend gaining momentum. If the RSI moves closer to the oversold area, we can expect Polygon to confirm the bearish narrative. 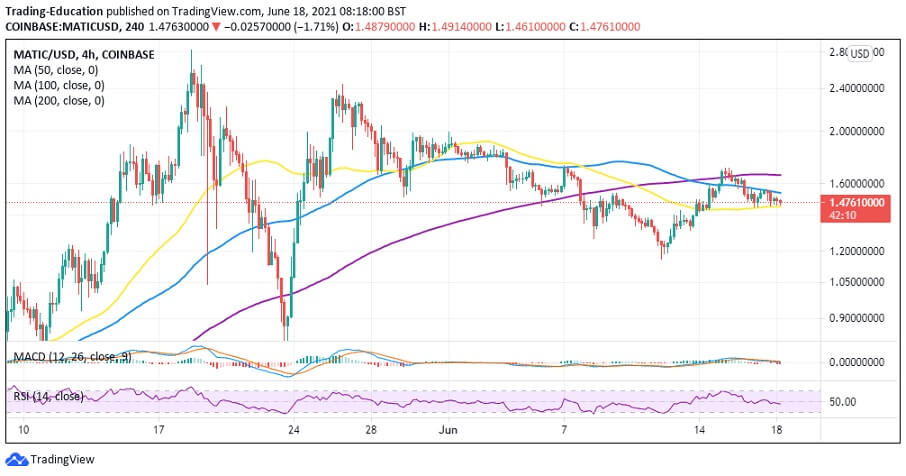 At the same time, the Moving Average Convergence Divergence (MACD) indicator has a bearish impulse, coming to life as it slides below the midline. In addition to that, the MACD line recently confirmed crossing beneath the signal line. Note that expanding the divergence below the signal line will reinforce the bearish grip.

On the upside, MATIC price faces immense resistance from the 100 SMA on the four-hour, $1.6 to the 200 SMA. All these hurdles must come out of the way to validate recovery to $2. However, overhead pressure is likely to intensify in the near term.

Subsequently, IntoTheBlock’s IOMAP model illustrates the presence of immense on-chain resistance ahead of Polygon. The model shines a light on the region extending from $1.51 to $1.56. Here, around 6,500 addresses previously purchased 120 million MATIC. Moreover, the area between $1.65 and $1.69 is the most robust barrier, carrying roughly 4,800 addresses that previously bought nearly 146 million MATIC.

On the downside, the model reveals relatively weak support areas, thus adding credence to the bearish outlook. Based on the model, the region between $1.43 and $1.47 is the most substantial buyer congestion zone, hosting approximately 3,600 addresses profiting from the 85 million MATIC previously bought.