MATIC Price Prediction: Polygon’s Recovery from the Dip to $1.35 an Uphill Battle

Polygon has not secured robust support since the correction brought about by the resistance at $2.5. Initially, formidable support appeared to have been established at $1.5, but the bearish cloud hovering across the cryptocurrency horizon cracked through and culminated in losses to $1.35.

Meanwhile, MATIC trades at $1.44 at the time of writing. The upswing from the short-term support at $1.3 is gradual but is encumbered by the weak technical levels.

A death cross pattern has appeared on the four-hour chart, implying that the downtrend is perhaps at the initial stages. The death cross usually points at a potential selloff. It comes into the picture when the short-term moving average crosses below its long-term moving average. According to the four-hour chart, the 50 Simple Moving Average (SMA) has crossed beneath the 100 SMA.

Increasing volume tends to accompany the death cross, reflecting the selloff. Note that the death cross can foresee a longer-term bearish outlook. Therefore, Polygon may continue with the ongoing retreat for a few days before a significant recovery comes into play. 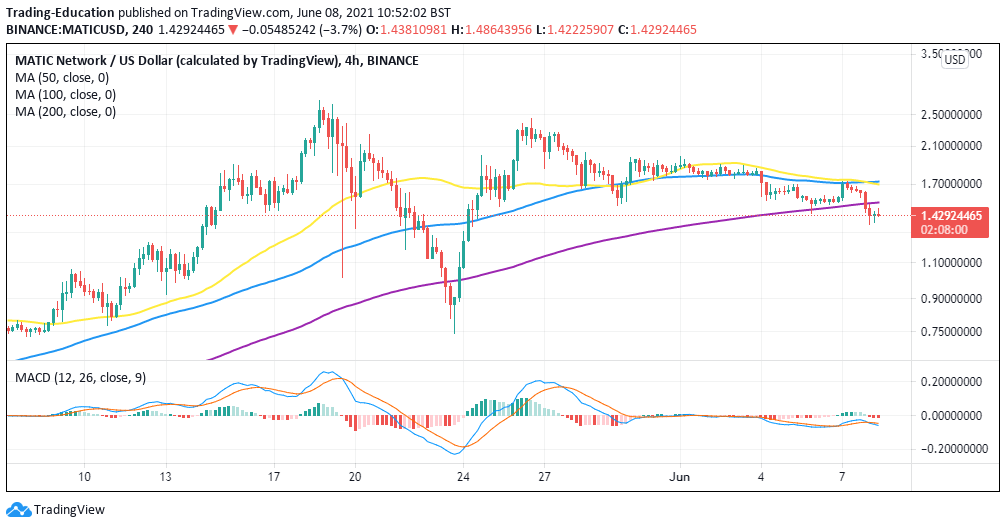 If the bulls manage to push the price above $1.5, they will soon encounter the 200 SMA, delaying the uptrend. Besides, recovery to $1.8 proved difficult over the last few days, especially with the overhead pressure presented by the 100 SMA and the 50 SMA.

The transaction history model, otherwise referred to as the In/Out of the Money Around Price (IOMAP) by IntoTheBlock (ITB), reveals immense selling pressure between $1.56 and $1.6. Here, nearly 7,000 addresses previously bought around 161 million MATIC. Trading beyond this zone will be an uphill battle for the bulls. Therefore, we can await delays in recovery or another correction toward $1.35 and $1, respectively.

On the flip side, Polygon sits on relatively weak support areas. This means that there isn’t enough buying pressure to absorb the selling pressure. Seemingly substantial support lies between $1.22 and $1.26. Here, 171 addresses previously scooped up 14.2 million MATIC.

Investors choosing to be bullish can also lookout for a confirmed break above $1.5. Moreover, a four-hour close above the 200 SMA may add credence to the bullish narrative, allowing buyers to focus on the next hurdle at $1.8 and $2, respectively.