Polkadot’s development team has committed to launching the much-awaited parachains. However, a couple of things must be completed first; “a full external audit, and “for Kusama to “execute at least one successful auction involving crowdloans and hosting at least one functional parachain.”

Meanwhile, Kusama is already working on upgrading the protocol, “Yours Truly,” to version 0.9. According to a tweet published on Monday, Kusama plans to deploy the Shell parachain. Note that the primary purpose of these developments is to begin auctions involving crowd loans.

The launch of Polkadot is nearing the climax after ten months of controlled development and executions. The Polkadot parachain functionality is the last stage and, as reported, will collaborate with Kusama. With the launch of the parachain, Polkadot will exist fully as a heterogeneous scalable multichain with sharded functionality.

Following the recent retreat from highs within a whisker of $50, DOT secured support at $35. The buyer congestion at this level allowed more investors to enter the market, pulling the price above $40. With the launch of parachains at the horizon, the multichain token could take off above $50 and begin the next phase toward $60. 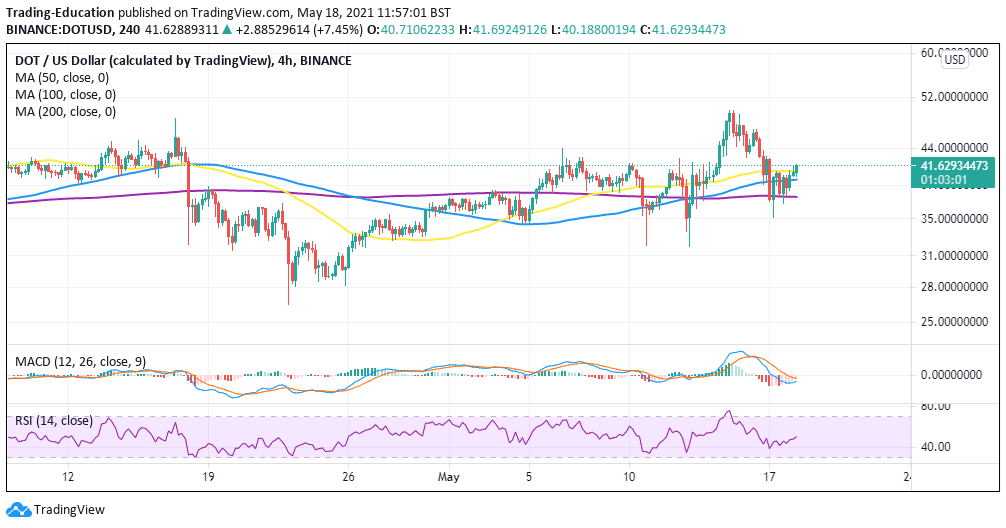 The four-hour chart shows that the ongoing uptrend would gain momentum in the near term based on various technical indicators. For instance, the Relative Strength Index (RSI) has bounced off the support at 40 and moves toward the overbought, adding credibility to the uptrend.

According to the Moving Average Convergence Divergence (MACD), the least resistance path is north. Note that the MACD line (blue) may flip massively bullish soon by crossing above the signal line. Besides, closing the day above the mean line (0.00) insinuates that buyers have the upper hand.

It is also important to note that the price has settled above the 50 Simple Moving Average. This shows that the downside is robustly protected, allowing bulls to focus on higher levels.