Polkadot trades at $24, following a 6.2% growth in 24-hours. According to data by CoinGecko, the token has added 9.4% to its value in seven days against a 34% pullback over 30 days. At the time of writing, DOT has attracted $1.6 billion in trading volume while holding in the eighth spot with a market cap of $23 billion.

A general glance at the four-hour chart reveals an up-trending market. This follows a gradual recovery from the recent support at $18. Lifting above $20 and, by extension, the 50 Simple Moving Average (SMA) appears to have reinforced the bullish grip. Hence, the overall technical picture vividly shows DOT’s potential step above $30.

A rising trend line (hypotenuse) and a horizontal line (x-axis) characterize the ascending triangle. The pattern infers that buyers are getting more aggressive than sellers; hence, the price forms a higher low pattern. A breakout above the x-axis completes the pattern, leading to significant price action. 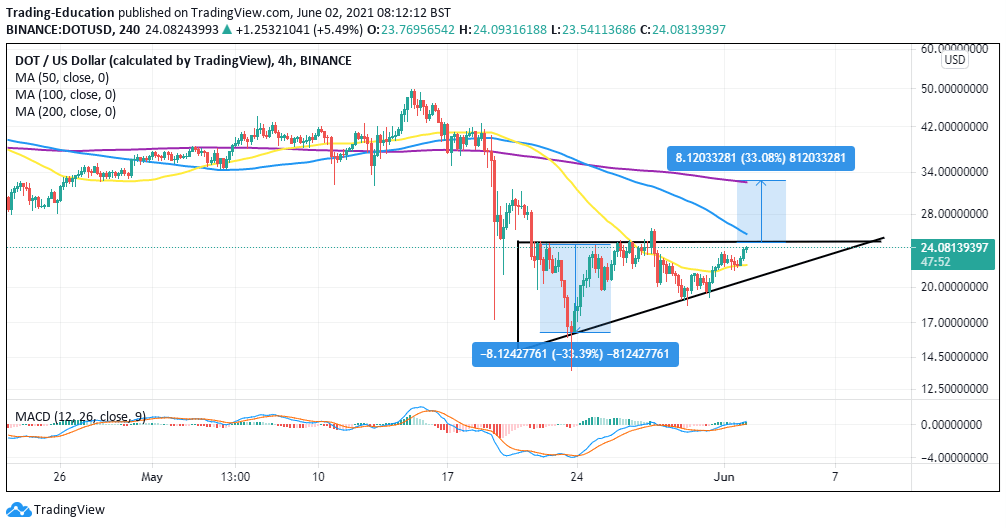 Traders use an inherent measuring technique to identify breakout targets. The distance between the start of the rising trend line to the flat line equals the target when applied to the breakout point. A stop-loss can be set at the recent swing low while the target ensures that traders reap maximum profit when in long positions.

Besides the bullish impulse from the rising triangle, the Moving Average Convergence Divergence (MACD) cements the bullish influence in the market. Realize that the MACD line (blue) has sustained the divergence above the signal line, thus driving the narrative further.

A break above the immediate hurdle at $25 would call more buyers into the market as Polkadot begins the subsequent recovery phase to $30 and $34, respectively.