Polkadot price is caught up in the tug of war affecting most cryptocurrencies. Bitcoin price tested support at $37,000 and struggled to regain momentum back to $40,000. Meanwhile, Polkadot is wriggling at the edge of a high cliff, risking massive losses to $11.5.

Belt up as Polkadot screams sell

Polkadot dodders at $21.88 at the time of writing. The token has sustained a downtrend from weekly highs of $26.5. Attempts for recovery were thwarted at this level; thus, the bearish camp continues to grow stronger.

The formation of a symmetrical triangle on the four-hour chart reinforces the bearish narrative. Realize this is a crucial pattern in technical analysis that has both bullish and bearish biases.

The triangle is molded by converging a couple of trend lines that link a series of sequential peaks and troughs. Generally, these lines are supposed to cross at an approximately equal slope. Thus, the formation brings to light a period of consolidation ahead of either a breakout or a breakdown.

Realize that a breakdown occurs from the ascending trendline and identifies the beginning of a downtrend. On the other hand, a breakout happens at the descending trendline and signifies the start of a bullish trend. Symmetrical patterns tend to have precise price targets for the breakout or breakdown, mainly measured from the highest point to the pattern's lowest point. 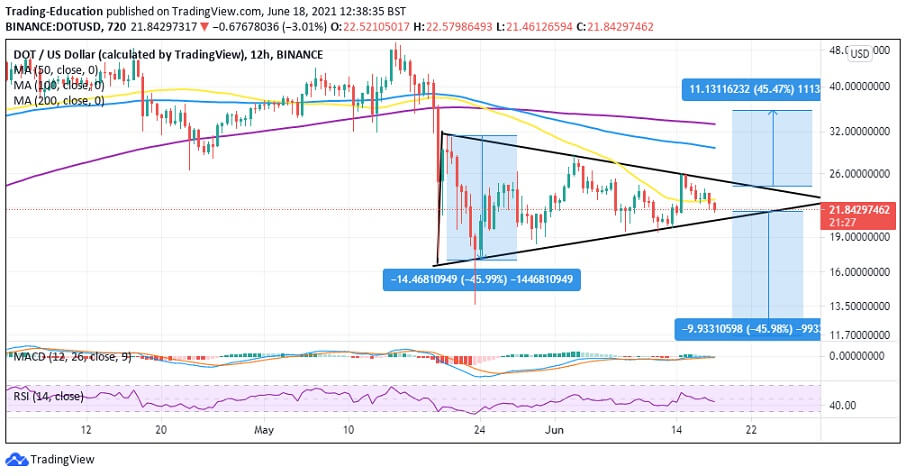 On the downside, a breakout target is determined by measuring the distance between the triangle's lowest and highest points. Hence, Polkadot's potential 45% drop to $11.5.

Furthermore, the Relative Strength Index (RSI) downward movement adds credence to the bearish building momentum. Following the rejection above the midline, the RSI is closing in on the oversold region. If this negative gradient holds, bears will gain momentum.

The Moving Average Convergence Divergence (MACD) indicator also has a bearish signal after failing to rise above the zero line. If the MACD dips further into the negative territory, we can anticipate a slide in price toward $11.5.

The support at $20 may invalidate the symmetrical triangle bearish outlook. Thus, allowing bulls to stamp their feet down and aim for a 45% upswing to 35. Nevertheless, it is worth keeping in mind that the pattern can also result in a breakout on the upside. Similarly, trading above the 50 SMA will most likely bolster the price significantly upward.