Polkadot's inclination to the downside seems to be increasing with every passing day. At the moment, the July high at $17.65 is fading from vision as DOT explores the rabbit hole toward $10.

Although the entire cryptocurrency market is trending downward, it is apparent that Polkadot's closing the day under $14 worsened the technical picture as sell orders were triggered. If the immediate support at $12 does not hold in the near term, we can expect DOT to drop below $10 in the coming sessions.

Polkadot Price Closes The Gap To $10

The Moving Average Convergence Divergence (MACD) indicator added gasoline to fire after sustaining a sell signal flashed at the beginning of the week. This technical tool trails the trend of an asset while calculating its momentum.

A signal to sell Polkadot came into the picture when the 12-day exponential moving average crossed beneath the 26-day EMA. As sellers flocked the market, the downtrend was reinforced by the MACD falling more profoundly in the negative region. If the technical outlook remains unchanged in the near term, investors should brace for another dip, perhaps under $10. 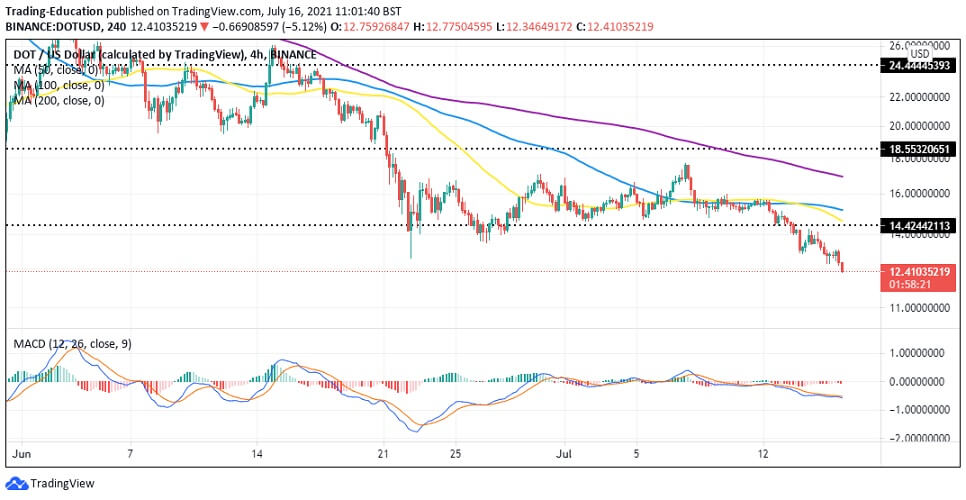 The same four-hour chart brings to light the formation of a death cross. This technical pattern is believed to stir the start of a downtrend or its continuation. As the 50 Simple Moving Average (SMA) crossed below the 100 SMA, the odds for another swing south increased. An increase in volume confirms the validity of this pattern, explaining Polkadot's slide from $16 toward $12.

According to the SuperTrend indicator, the downward pull on Polkadot is far from over. In other words, a call to sell the token still hovers, suggesting that attempts to recover the lost ground are bound to fail.

Note that the SuperTrend also follows the trend of an asset like a moving average. However, it utilizes the average true range (ATR) in its calculations. As long as the technical tool signal stays unchanged, Polkadot will keep exploring downhill levels.

The TD Sequential indicator has just flashed a signal for investors to buy Polkadot on the 12-hour hour chart. This call to buy occurred in a red nine candlestick and implied that the downward force is fading and bulls are preparing to take over.

If validated, Polkadot could rally in one to four 12-hour candlesticks. Therefore, it is essential to watch out for support confirmation at $12. Here, buyers will work on the next attack mission on barriers at $14, $18, and $18.