Polkadot spent the weekend hinting for higher support following a correction from the monthly high close to $50. The trend reversal occurred amid widespread crypto declines, mainly triggered by Bitcoin’s drop to $42,000. DOT could not secure support above $40; thus, the buyer congestion at $35 was tested again.

At the time of writing, Polkadot is trading at $38 in the wake of a recovery from the primary support. The token has also embraced support at the descending channel’s lower boundary; consequently, the path with minor hurdles is upward, at least for now.

Polkadot is currently exchanging hands between the 200 Simple Moving Average (SMA) support and the 100 SMA resistance. The support has been reinforced by the channel’s lower edge, which means DOT has a higher chance of moving higher than resuming correction.

The Moving Average Convergence Divergence (MACD) shows that recovery is possible following the recoil at 40. If the movement continues toward the midline, more buyers will be called back into the market as the path to $50 gets cleared. 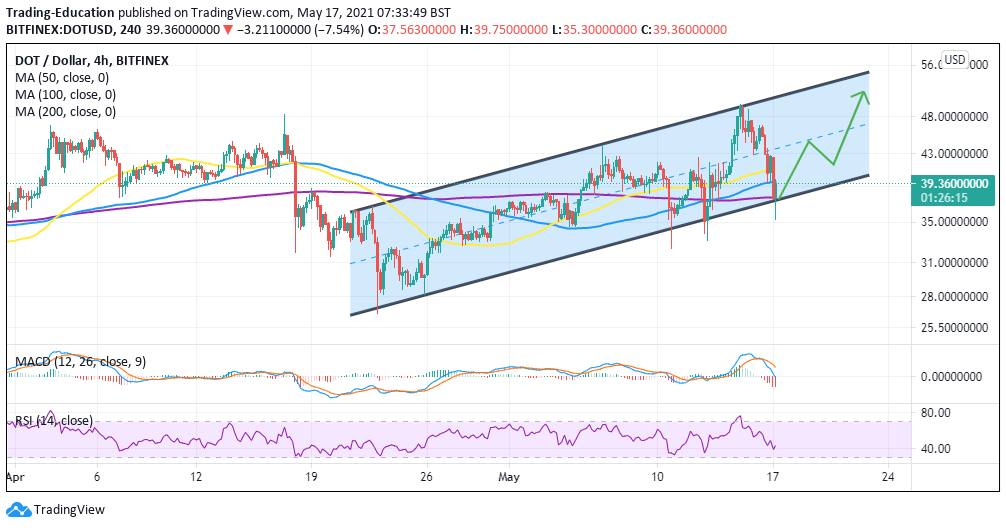 The daily chart brings into light a bullish signal from the SuperTrend. This indicator follows the trend of an asset and foresees the direction. It gives both bullish and bearish signals, suggesting to traders when to long or short an asset.

In the meantime, the Supetrend indicator has presented a buy signal, implying that investors should consider buying into Polkadot. As long as the call is green and below the price, the slightest resistance path will be upward.

The four-hour Simple Moving Average Convergence Divergence (MACD) illustrates that the Polkadot is not out of the woods. The bearish impulse is profound, especially with the MACD line (blue) extending the divergence under the signal line. Besides, the indicator is likely to slide into the negative region thus, validating the downtrend back to $35 and $30, respectively.