Polkadot Price Analysis: Why DOT Could Extend Breakdown to $11 Before Recovery Sustains

At the time of writing, DOT teeters at $15.8 as bulls focus on holding above $16. With the resistance at $17, gains above $20 may take longer to materialize. On the downside, a symmetrical triangle pattern shows that the downtrend is far from over.

Polkadot price four-hour chart illustrates the formation of a symmetrical triangle. The chart pattern is drawn by converging two trend lines, linking a series of sequential peaks and troughs.

Generally, the trend lines meet at an approximately equal slope. The pattern reveals a period of consolidation ahead of either a breakout or a breakdown.

As observed on Polkadot price chart, a breakdown occurs from the ascending trend line and identifies the beginning of a downtrend, leading to the weekly losses to $14.

It is worth mentioning that symmetrical triangles have exact breakout and breakdown targets, equal to the distance between the widest points. So, for instance, Polkadot looks toward a potentially 46% correction to $11. 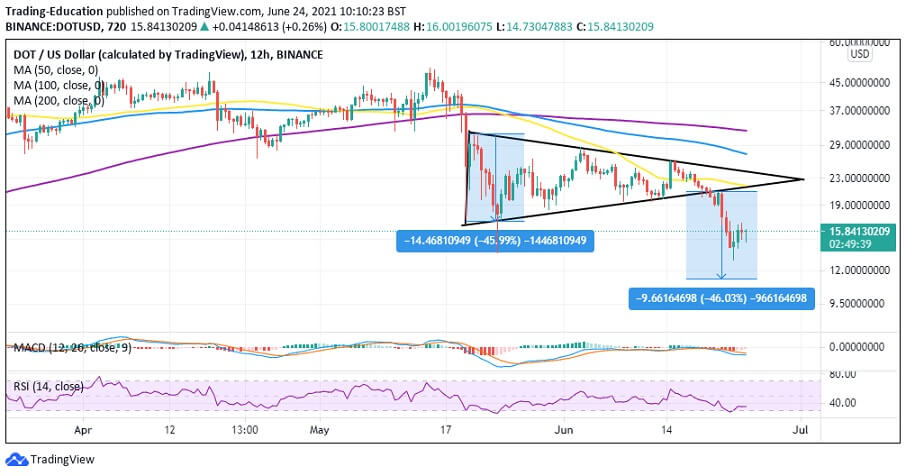 Note that Polkadot currently enjoys support at $15 and $14. However, according to short-term technical indicators, the uptrend is not strong enough to pull its weight. Hence, the possibility of the bearish leg extending to $11.

The Moving Average Convergence Divergence (MACD) adds credence to the bearish outlook, as seen on the chart. With the MACD settling beneath the zero line, sellers are bound to gain traction. Besides, the impact of the bearish signal flashed when the MACD line crossed below the signal line (blue) seemed apparent and could last longer.

If support at $15 is defended, the Relative Strength Index (RSI) points toward Polkadot assuming a sideways price action. Therefore, DOT may consolidate between $15 and $17 before the next significant price action.