Polkadot has renewed the bullish outlook in the wake of sharp losses from price levels around $44. The bearish wave swept across the cryptocurrency market during the American session on Monday and extended to the Asian session on Tuesday. DOT tumbled under $40 and tested support at $35 before resuming the ongoing recovery.

Polkadot is exchanging hands at $36 at the time of writing. The ascending channel’s lower boundary immediately supports the token. If this support stays intact, DOT will comfortably nurture the uptrend above $40.

A delay is expected at the 200 Simple Moving Average (SMA) on the upside. Polkadot must endeavor to overcome the resistance at this level to ensure that the trend remains in the bulls’ hands.

Consequently, gains toward $50 will depend on DOT’s ability to cross into the channel’s upper layer. A move such as this will prove to buyers that stability has returned and speculation for gains toward $50 would rise even though gradually. 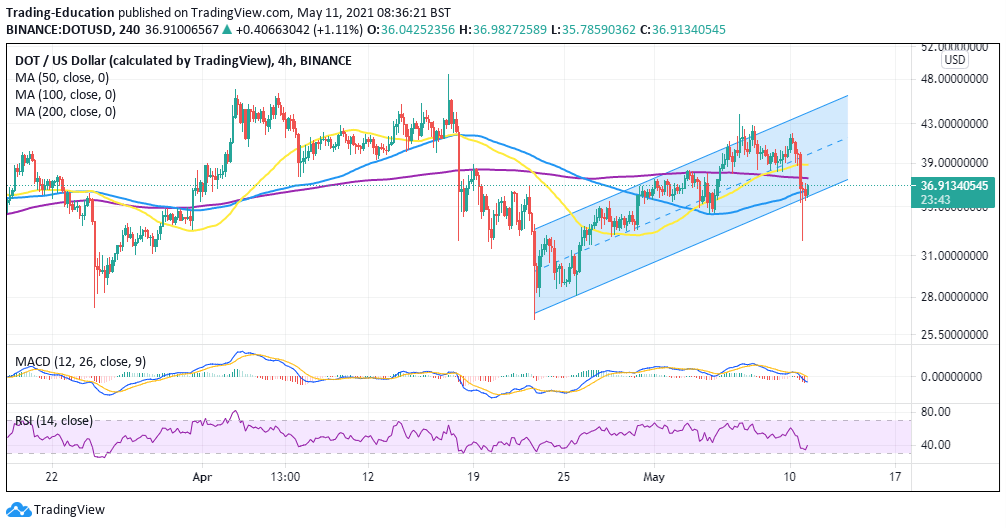 Polkadot’s bullish outlook has been accentuated by the Relative Strength Index (RSI), as observed on the four-hour chart. The retreat from highs of $44 to $35 saw the RSI dive to levels marginally above 40. Currently, the RSI is lifting toward the midline, adding credibility to the upswing. A continued recovery toward the overbought region may call more investors into the market as $50 beckons.

It is worth noting that the Moving Average Convergence Divergence (MACD) has a bearish impulse. For example, the indicator has extended action into the negative region in addition to the MACD line (blue) crossing below the signal line. If this indicator maintains the technical outlook, Polkadot’s ongoing uptrend will be jeopardized, paving the way for another downswing toward $30.