Polkadot Price Prediction: DOT on the Launchpad for Massive Explosion to $36

Polkadot broke out on Monday after building a solid foundation at $20 late last week. The weekend session was more or less sluggish but paved the way for the gains eyeing $36.

Meanwhile, DOT trades at $25 after touching $26 for the first time since June 5. The hurdle at $26 appears strong, but if the technical breakout holds, Polkadot will soon hit price levels above $30.

The symmetrical triangle on the four-hour chart has a colossal bullish outlook. This chart pattern is drawn by converging two trend lines, narrowing toward a relatively equal slope. The upper trend line links a series of lower highs while the lower trend line connects sequential troughs.

As the triangle begins, trading is characterized by huge volumes, but consolidation is experienced as the pattern narrows. Finally, a breakout occurs before the trend lines meet to validate the symmetrical triangle.

As seen on the Polkadot price chart, a breakout above the upper trend line marks the beginning of an uptrend. An uptick in volume accompanies the breakout with an exact target measured from the lowest to highest points. 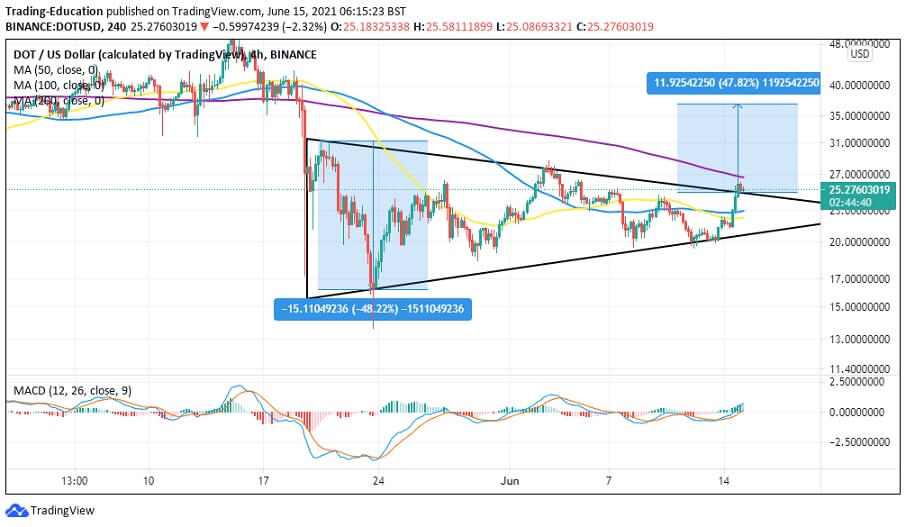 Despite the triangle target at $36, Polkadot has run into an immense hurdle at $26. The seller congestion at this zone must come down to pave the way for the 47% rally.

Meanwhile, the Moving Average Convergence Divergence (MACD) indicator on the four-hour chart adds credence to the bullish outlook. Realize that this is a momentum indicator that also follows the trend of an asset.

The MACD rarely identifies oversold or overbought conditions but gives signals to either buy the dip or sell the top. For instance, when the indicator crosses above the zero line, it is a bullish signal. Additionally, the MACD line crossing above the signal line is a call to buy, as Polkadot price chart highlights.

The resistance at $26 has been strengthened by the 200 Simple Moving Average (SMA) on the four-hour chart. Therefore, the rejection from this level will likely lead to more declines as overhead pressure mounts. Hence, failure to hold at $25 or the symmetrical triangle’s upper trendline would pave the way for the bearish leg to extend to $20.