Cryptocurrency fund manager Osprey Funds has recently announced the launch of a Polkadot trust. According to the firm, the product becomes the only Polkadot trust in the market.

Osprey Funds Polkadot trust has already started receiving requests from private investors. Currently, the minimum investment has been set at $25,000 while Coinbase has been selected to provide custody services. According to a statement by the CEO of Osprey Greg King:

"Polkadot is an amazing platform focused on enabling Web 3.0.

With limited access points to investing in DOT currently, the Osprey Polkadot Trust will enable accredited investors who want DOT exposure to get titled, auditable ownership through a U.S.-based investment vehicle."

Osprey's next plan is to publicly list the trust in the OTCQX market to increase exposure to the traditional brokerage accounts.

Grayscale also plans to launch a Polkadot product, but the process is still underway.

Polkadot ripe for a massive upswing to $45

An inverted head-and-shoulders (H&S) pattern has formed on the four-hour chart. This is a highly bullish pattern that results in a gigantic liftoff on maturity—traders lookout for a break above the neckline resistance after completing the right shoulder.

A spike in volume affirms the breakout tends to shift from the downtrend to an uptrend. For instance, Polkadot has lifted above the crucial resistance and currently nurtures the upswing to $45. 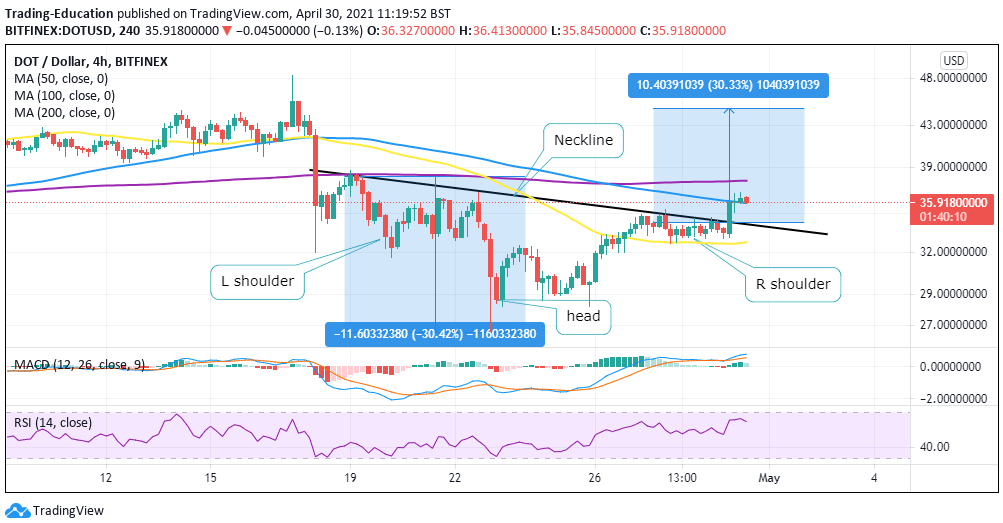 The token trades at $35.6, while the immediate support has been provided by the 100 Simple Moving Average (SMA). On the upside, the 200 SMA could hinder progress toward $40 and $45, respectively.

On the other hand, closing the day under the 100 SMA may increase overhead pressure. Primary support is expected at the neckline. Suppose the bearish leg continues under this zone; massive sell orders will be triggered as investors exit the market aiming to reenter at a lower price, perhaps at the $25 buyer concentration zone.