Altcoins rallied in the past couple of weeks, with some outperforming Bitcoin despite triggering the market into an upward trajectory. Polkadot surged by more than 90% from support at $10.5 and brushed shoulders with $20.

The token became of the leading spot market makers, according to a report by Kraken exchange. It implies that traders are particularly interested in DOT, and the pulldown from $20 may be short-lived, allowing for another liftoff above $20.

DOT is trading at $17.3 at the time of writing and after correction from the recently traded highs of $20. The drop failed to secure support above $18, suggesting that bears are becoming more aggressive. Hence, the downtrend is expected to continue, perhaps to the 50 Simple Moving Average (SMA). Holding onto this zone will allow bulls to stamp their feet down while executing another attack mission for gains beyond $20.

However, the Moving Average Convergence Divergence (MACD) has recently sent a call to sell Polkadot. The bearish signal occurred as the 12-day EMA crossed below the 26-day EMA. Note that the MACD movement toward the mean line validates the downtrend. Thus, it is imperative to anticipate another considerable drop before another recovery comes into the picture.

Realize that the Relative Strength Index (RSI) is in the middle of a retreat, following a rejection from the overbought area. As it drops under the midline, bears will likely gain more traction. Thus, pulling Polkadot closer to the 50 SMA, currently at $16.

Traders should keep in mind that the uptrend will resume if DOT holds at $16. Otherwise, if broken, the correction will extend to $14. 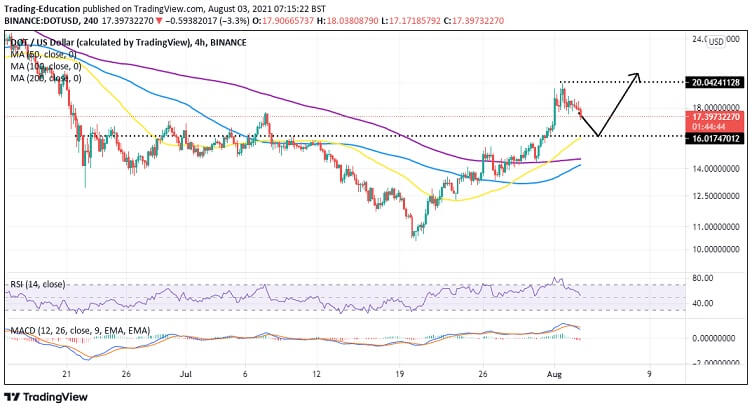 A spike in Polkadot related mentioned on social media shows that investor interest is still high in spite of the resistance anticipated at $20. According to sentiment, an uptick in social volume gives the asset strength to sustain an uptrend but only for a short period. As price hits a formidable barrier, the sentiment tends to flip bearish while holders sell to take profits.