Polygon Price Forecast: MATIC Could Hit the Reverse Button, Falling by a Whopping 60%

Polygon's uptrend has been curtailed since bulls failed to rise above $2.5. A lower high pattern continues to develop on the four-hour chart, hinting at a bearish strengthening camp.

Meanwhile, MATIC trades at $1.65 while bulls battle acute resistance at the 100 Simple Moving Average (SMA) and the 50 SMA. As the bearish momentum gains traction, immediate support at $1.6 is under tremendous pressure.

Polygon at great risk of massive drop to $0.6

Polygon has formed a descending triangle on the four-hour chart. This chart pattern is highly bearish and usually triggers a significant price correction. A couple of trend lines mold the pattern connecting the descending highs and the relatively equal troughs.

As the price creates the lower high pattern, the bearish camp gets stronger. Eventually, a break is expected at the horizontal support (x-axis). Realize that as the descending triangle nears maturity, the market is characterized by consolidation. A break at the horizontal line marks the beginning of a downtrend. A massive trading volume comes into the picture as more sellers join the trend. 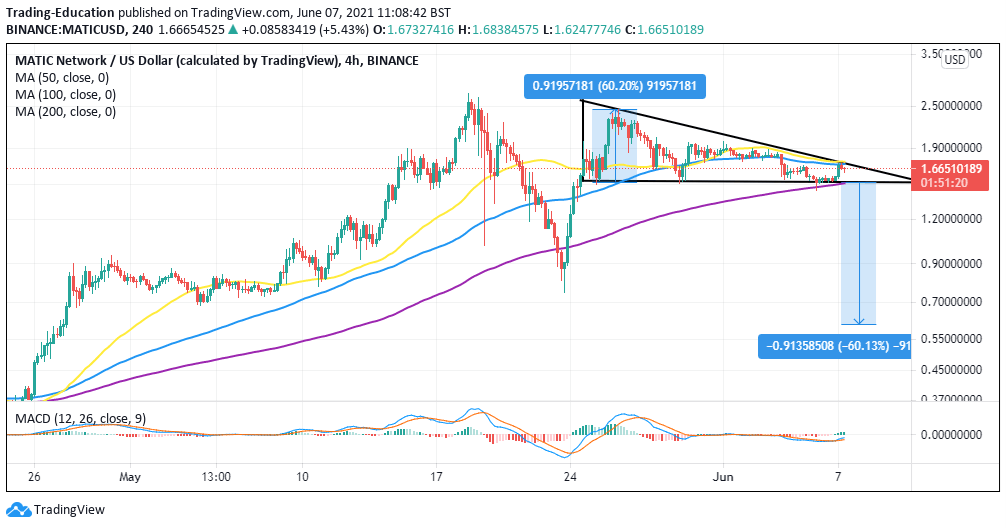 The In/Out of the Money Around Price (IOMAP) by IntoTheBlock (ITB) shows that a colossal seller congestion zone lies ahead of Polygon. The region between $1.76 and $1.81 hosts the 2,300 addresses that previously bought roughly 206 million MATIC. Cracking this massive barrier would be a challenging task for the bulls. For now, the least resistance path is downward.

On the downside, support areas are not as strong as the resistance zones highlighted by the model. However, our attention has been directed to the region running from $1.52 to $1.57. Here, 5,000 addresses previously bought nearly 116.6 million MATIC. If the price slices through this zone, we can expect a major downfall, adding credence to the technical bearish outlook.

If bulls manage to push the resistance at the 50 SMA and the 100 SMA in the rearview, the above bearish scenarios may be invalidated. Moreover, closing the day above the immediate support at $1.9 would trigger immense buy orders as investors speculate gains to $2.5.