Polygon more than doubled in value following the slump in price in May. From support at $0.75, the price came very close to brushing shoulders with the yearly highs but stalled at $2.4. A weak bullish momentum culminated in the gradual downtrend. Thus, MATIC trades at $1.8 at the time of writing.

MATIC eyes a massive downswing under $1

Toward the end of last week, the price retreated to $1.5, but bulls recovered some ground before hitting a barrier at $2. At the time of writing, Polygon has resumed the downtrend within the confines of a descending triangle.

This is a highly bearish pattern in technical analysis that often leads to the continuation of the previous trend. The lower high price formation (descending trend line) shows that bears have the upper hand. On the downside, support at the horizontal line (x-axis) keeps the bearish advances in check.

The descending triangle completes with a final break at the x-axis, paving the way for a massive drop. Triangles tend to have exact breakout targets measured from the highest to lowest points. Therefore, Polygon could dump at least 35% of its value if the pattern matures as anticipated. 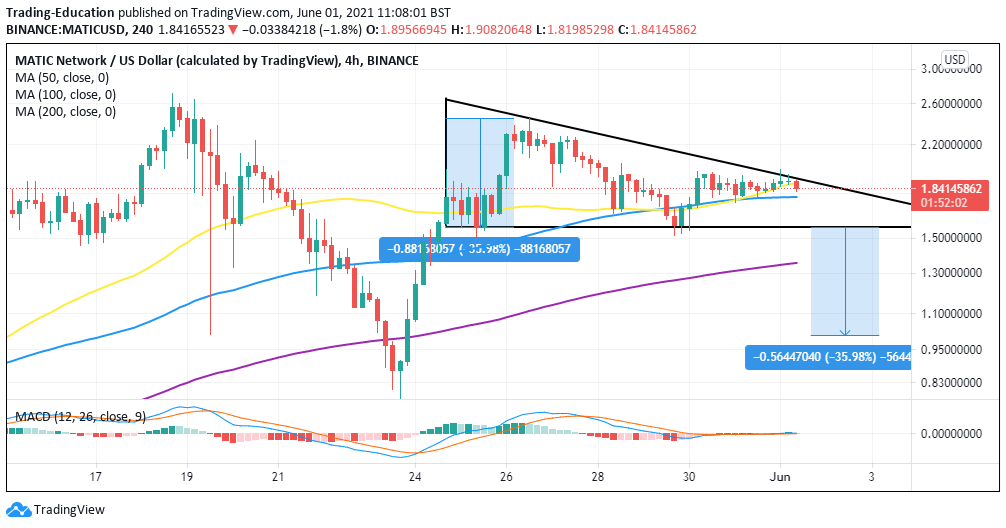 The network growth model by Santiment shows the number of new addresses joining the protocol each day. The metric shines a light on user adoption over time and traders can use it to identify whether the project is gaining or losing traction.

According to the chart, last week’s uptrend stalled at 7,222 addresses per day, but the metric has dived to the current 3,730 addresses. The decline is having a toll on the bulls’ ability to sustain the uptrend; hence, the correction. If the addresses created on the network continue to tumble, MATIC will validate the triangle’s breakdown target under $1.

The Moving Average Convergence Divergence (MACD) shows that Polygon could settle for a consolidation period in the short term. Note that support at the 100 Simple Moving Average (SMA) is in line to prevent losses from extending to the descending triangle’s x-axis, thereby averting the potential losses under $1.