Polygon’s performance in 2021 has been exemplary, trading a new record high after a new recording. Achieving these milestones bolstered MATIC to a top 15 crypto asset, with a market capitalization of more than $9 billion. At the time of writing, Polygon has attracted over $6.2 billion in trading volume and trades at $1.6.

The need for formidable support comes after MATIC was rejected at $2. The upswing from the support at $0.8 managed to overcome all the hurdles presented by the 200 Simple Moving Average (SMA), the 100 SMA, and the 200 SMA but lost momentum at $2.

A correction is underway, with the 50 SMA having been lost as support and flipping into a resistance area. The four-hour chart presents the 100 SMA as a short-term anchor. However, if the bearish leg stretches further, Polygon will be forced to seek support at the 100 SMA, the buyer congestion at $1.3, and the 200 SMA. 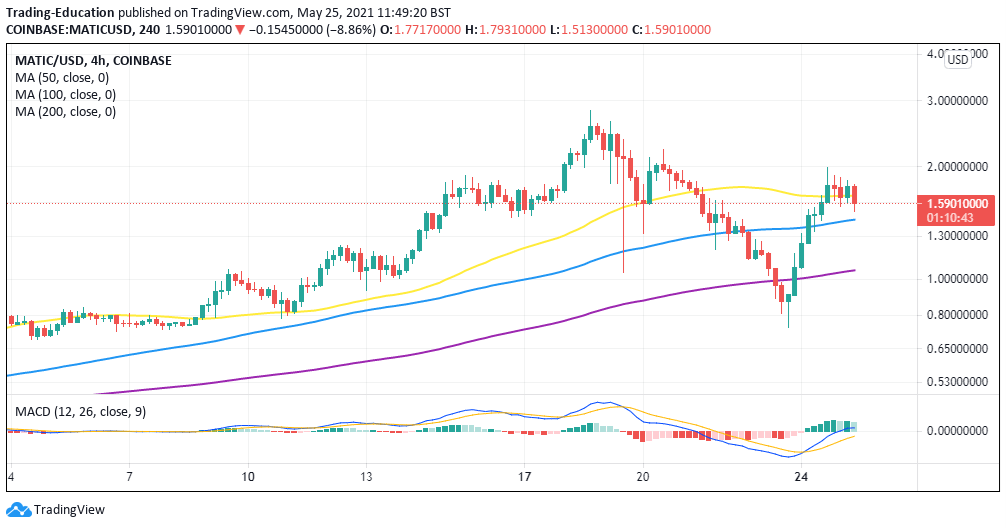 The Moving Average Convergence Divergence (MACD) on the four-hour chart hints at the trend favoring the bulls despite the retreat from $2. Note that the MACD line (blue) keeps increasing the divergence above the signal line, adding credibility to the bullish narrative. Therefore, there is a high chance of the price holding the 100 SMA and restarting the uptrend to levels past $2.

The IOMAP on-chain metric by IntoTheBlock shines a light on both the massive resistance and support. On the upside, the most robust seller congestion zone runs from $1.62 to $1.66. Here, nearly 3,500 addresses previously bundled up roughly 23.3 million MATIC. Trading above this zone would be challenging for the bulls and may delay the expected recovery.

On the downside, Polygon sits on top of vital support areas. For instance, the region between $1.48 and $1.53 holds around 4,000 addresses that are currently profiting from the approximately 184.3 million MATIV purchased previously. The strong support in this zone hints at the token consolidating shortly before a breakout comes into the picture.

Polygon
MAT
Top Brokers in
All Regulated Brokers
67% of retail clients lose money when trading CFDs with this provider.