Polygon, a layer-solution token executing on the Ethereum network, continues to gain ground both in the token value as the number of users. The network has completed the rebranding from Matic Network, which saw its blockchain solutions upgraded. At the time of writing, Polygon trades at $0.6 after hitting a new record high around $0.62. If the technical picture remains intact, MATIC will hit close to $1.

Users have been moving to Polygon following the rebranding from Matic Network. Layer-one solution tokens such as Solana and Cosmos keep setting the pace, attracting developers and users due to features like faster transactions and lower fees. More attention is directed to layer-two solutions such as Polygon as they assist the Ethereum network in dealing with the rising level of competition.

For instance, Santiment shows that Polygon network activity has soared immensely over the last 30 days. The active addresses on-chain metric reveals an uptick in daily addresses interacting on the network to roughly 9,400. This upswing reflects increased speculation as investors stream into the project to gain more exposure.

Santiment also shows a surge in the number of new addresses joining the network based on a 30-day trailing average. At the time of writing, the network growth on-chain metric is up 72.4% from a low of 1,196 to 4,327. An improving network growth shows that the project is gaining traction, which is a bullish signal.

From a technical perspective, MATIC is in the middle of an upswing targeting $1. The uptrend has been validated by the Moving Average Convergence Divergence (MACD) indicator on the four-hour chart. If the MACD motion within the positive region is sustained, Polygon will extend the ongoing uptrend. 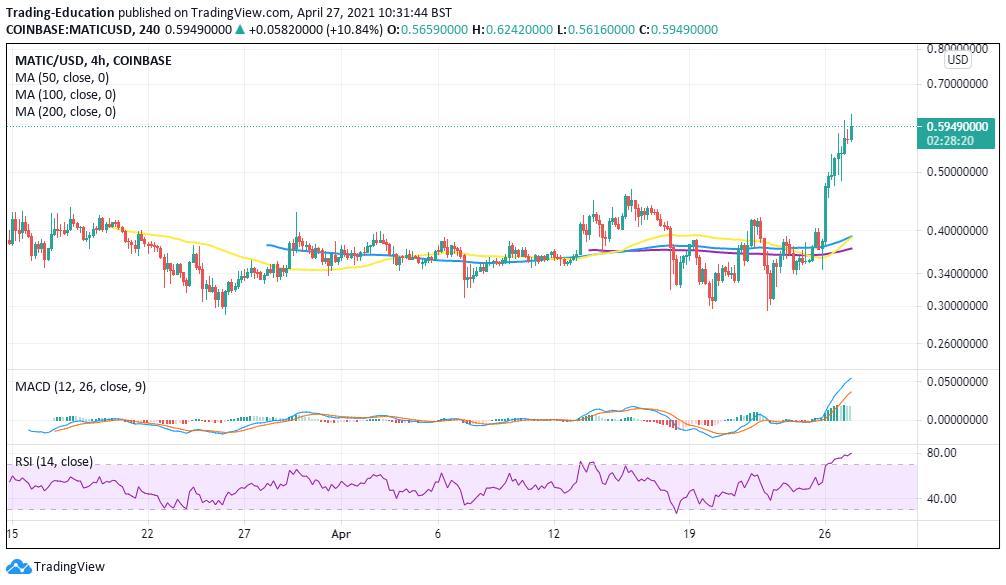 The Relative Strength Index (RSI) on the four-hour chart emphasizes the uptrend as it crosses into the overbought region. Support above $0.6 will ensure that bulls focus on lifting toward $1, thus reinforcing the uptrend.

On the other hand, if bulls lose the ground above $0.6, overhead pressure may begin to mount. Since the RSI is already in the overbought area, we are likely to see a correction ensue. On the downside, support is envisaged at $0.5 and $0.4, respectively.