Polygon Price Prediction: MATIC on the Verge of Breaking Out as Consolidation Ends

Polygon's recovery from May's crash to $0.75 failed to rise to the all-time high of $2.7. However, the price came close, trading at $2.4 before a correction came into the picture. Another short-term support has been established at $1.5, allowing bulls to focus on gains toward the record high.

However, the upside seems limited to under $2, leading to a consolidation period. Polygon trades at $1.8 amid the push by bulls to come out of the sideways trading action.

Polygon is a whisker away from a colossal breakout

MATIC is trading in a narrow range, controlled by constricting Bollinger Bands. Immediate support has been accorded to the token by the 100 Simple Moving Average (SMA) and the BB lower boundary on the four-hour chart.

Meanwhile, a breakout is required past the BB middle barrier, and by extension, the 50 SMA. Squeezes of the Bollinger Bands indicate low volatility periods and are usually succeeded by significant price movements. The longer the squeeze, the higher the probability of a solid breakout.

This technical index does not provide a clear path regarding the direction of Polygon's trend. As a result, the lower and upper band area is a reasonable no-trade zone. Only a four-hour candlestick close above or below this area will determine where MATIC headed next. 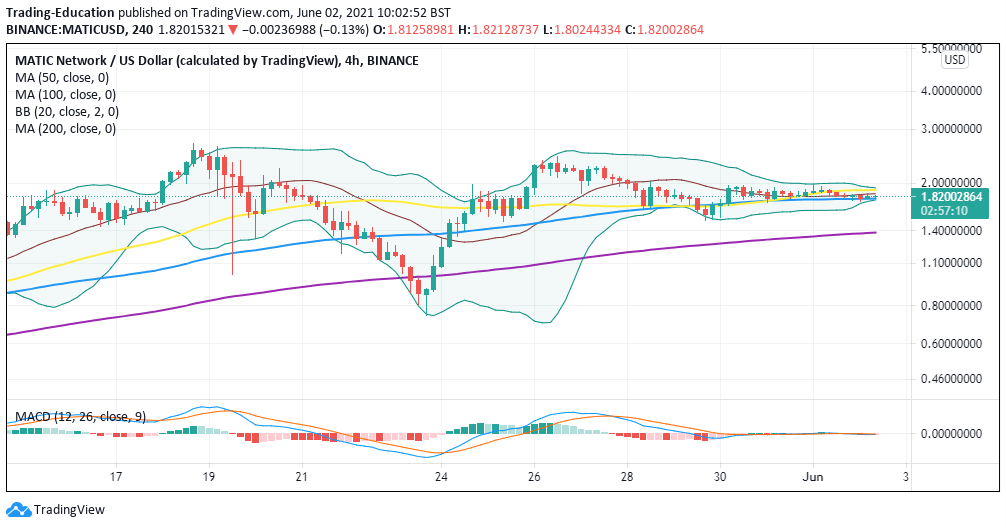 The In/Out of the Money Around Price (IOMAP) on-chain model shows the transaction history on the Polygon network. IntoTheBlock (ITB) groups the volume of transactions and addresses into ranges that can identify formidable supports and resistances.

For example, the IOMAP shines a light on the seller congestion between $1.82 and $1.87. Here, around 7,000 addresses previously bought roughly 205 million MATIC. This massive barrier will likely challenge the bull's ability to break through.

On the downside, several support areas are in line to ensure that declines to no extend to $1. The most substantial buyer concentration zone runs from $1.7 to $1.77. Here, nearly 4,700 addresses previously purchased approximately 121.3 million MATIC. Although the support is half as strong as the highlighted resistance, other buyer congestion zones may help to prevent bearish advances.