Polygon led altcoins in recovery this week as bulls shattered multiple barriers and posted incredible gains. Following the dip to $0.8, investors took advantage of the lower price to join the market. With the tail forces intensified, the least resistance path was upward.

The run-up above $2 brushed shoulders with $2.5 on Wednesday before a correction took over. Meanwhile, MATIC trades at $1.98 after losing support at $2. As the technical picture flips bearish, declines are expected to continue toward $1.4.

The short-term technical picture speaks volumes about the growing bearish outlook. Losing support at $2 has shifted the bulls’ short-term perspective. Currently, the primary goal is to secure higher support, possibly at the 50 Simple Moving Average (SMA) on the four-hour chart.

Note that the Moving Average Convergence Divergence (MACD) is about to present a sell signal. The call to sell will manifest as the MACD line (blue) slides under the signal line. A continued movement to the mean line (0.00) may trigger massive sell orders as bears speculate a drop to $1.4 and under $1. 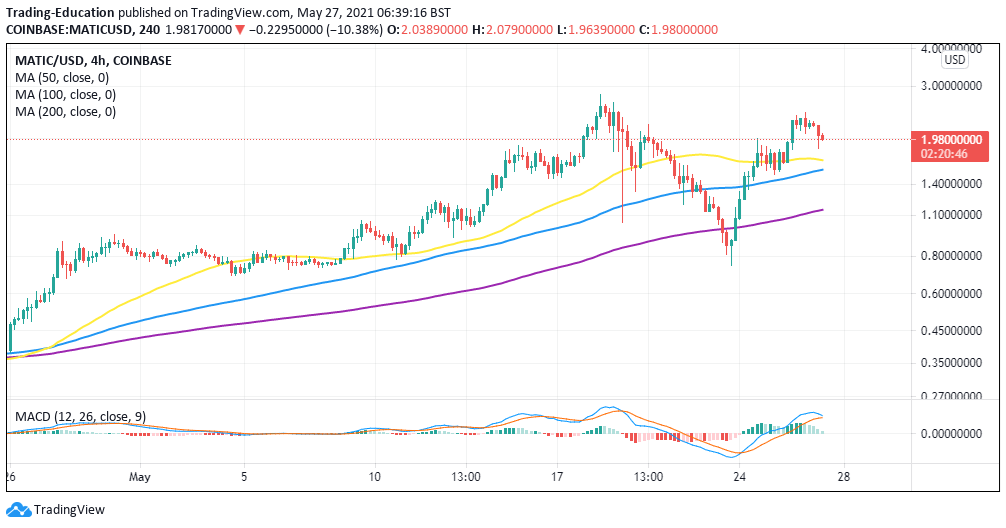 Looking that the other side of the picture

On-chain metrics give an insight into a cryptocurrency project’s fundamentals and help predict the general trend. According to Santiment’s network growth model, the retreat from $2.5 is healthy based on the rising number of new addresses joining the protocol.

Before the breakdown to $0.8 last week, newly created addresses hit a 30-day high of around 8,200. Amid the declines, the metric dropped to nearly 3,500. At the time of writing, 7,200 addresses have been created on the network, insinuating that Polygon has the potential to sustain the uptrend back to $2.77.

The market value realized value (MVRV) on-chain model tracks the profit or loss ratio of the holders of MATIC tokens moved in the last 30 days analyzed against the price at which each previously moved.

A low MVRV ratio suggests that holders are either at a loss or are yet to break even. Therefore, they are unlikely to sell. Following the widespread declines last week, the MVRV ratio plunged to 13% but started to improve in tandem with the recovery.

As the ratio recovers, more investors are attracted to join the market. At the moment, the ratio stands at 115%, a figure relatively lower than the ratio of 171% at the all-time high. In other words, Polygon still has the potential to rise to higher price levels in the near term.