Polygon has not been spared by the end-week bearish wave sweeping across the cryptocurrency market. Analysts believe Elon Musk’s tweet initially triggered a selloff in Bitcoin from highs of $39,000 to $36,000. The bearish outlook has spread through the market, with tokens like MATIC recording double-digit losses.

Polygon wriggles at the edge of a high cliff

MATIC’s uptrend, eyeing the record high of $2.7, succumbed to selling pressure between $1.8 and $2. The instability prevailing in the market added gasoline to the fire as a correction ensued. With the token exchanging hands at $1.6, the technical outlook is primarily bearish.

The four-hour chart brings into the picture a descending triangle pattern that is currently nearing completion. This is a highly bearish pattern in technical analysis. It is formed using two trend lines to link the sequential declining highs and the relatively equal lows.

The lower high pattern shows that sellers are getting aggressive. Eventually, the price is supposed to slice through the horizontal resistance and complete the triangle. Low volumes are experienced as the price wobbles in the triangle, but the breakout at the x-axis should attract large volumes as sellers swing into action.

Descending triangles have precise targets equal to the distance between the widest points, as illustrated. If support at $1.6 fails to hold, investors should brace for a massive downhill roller coaster ride. 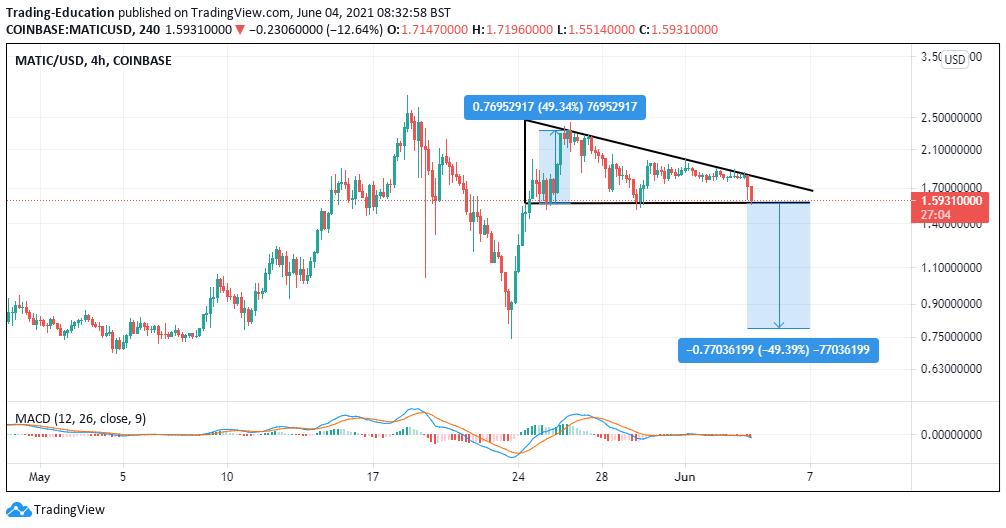 The Moving Average Convergence Divergence (MACD) indicator affirms the downtrend after presenting a sell signal. A call to sell occurs with the MACD line (blue) crossing below the signal line. Moreover, bears will gain more traction if the indicator slides into the negative region.

Recovery will not come easy based on the findings of IntoTheBlock’s IOMAP on-chain model. Overhead pressure rises appreciably toward $2, with the most robust running from $1.81 to $1.86. Here, roughly 10,000 addresses previously bought approximately 218.9 million MATIC.

On the downside, support is relatively weak and might not hold if selling pressure rises, especially with the descending triangle on the brink of an explosion. All eyes are directed to the region between $1.52 and $1.57. Here, 4,000 addresses previously scooped up nearly 70 million MATIC. Trading under this region may trigger declines to levels below $1.