Zcash, a privacy-oriented cryptocurrency, continues to trade in consolidation, as observed on the four-hour chart. A dip to $87 in May left many investors bleeding. However, a recovery ensued with ZEC lifting to $185, where it encountered a massive barrier.

The last two weeks have seen bulls wallow in consolidation apart from the drop to $121 at the beginning of the week. Following another brief recovery impacting most cryptocurrencies on Thursday, Zcash tried but failed to make way above a confluence resistance at $150.

This confluence hurdle has been formed by the 50 Simple Moving Average (SMA) and the 100 SMA. Meanwhile, ZEC is trading at $143 amid a correction from the hurdle. Bulls have seemed to have abandoned the push for gains above $185 and are concentrating on hunting for support.

A symmetrical triangle has been formed on the four-hour chart. Two trend lines create this technical pattern that gives way to either a breakout or a breakdown. One trend line connects the descending peaks while the other the ascending troughs, and they are supposed to meet at a relatively equal slope.

As the trend lines converge, Zcash sinks into consolidation, characterized by low trading volumes. Following the confluence resistance, ZEC is likely to retest the lower trend line. Sliding below this crucial support will trigger the anticipated symmetrical triangle breakdown.

The downswing will lead to a spike in trading volume as sellers come out of their positions, perhaps to buy back when the price is lower. Breakouts and breakdowns have precise targets measured from the pattern's lowest to highest points, hence predicting ZEC plunging to $53. 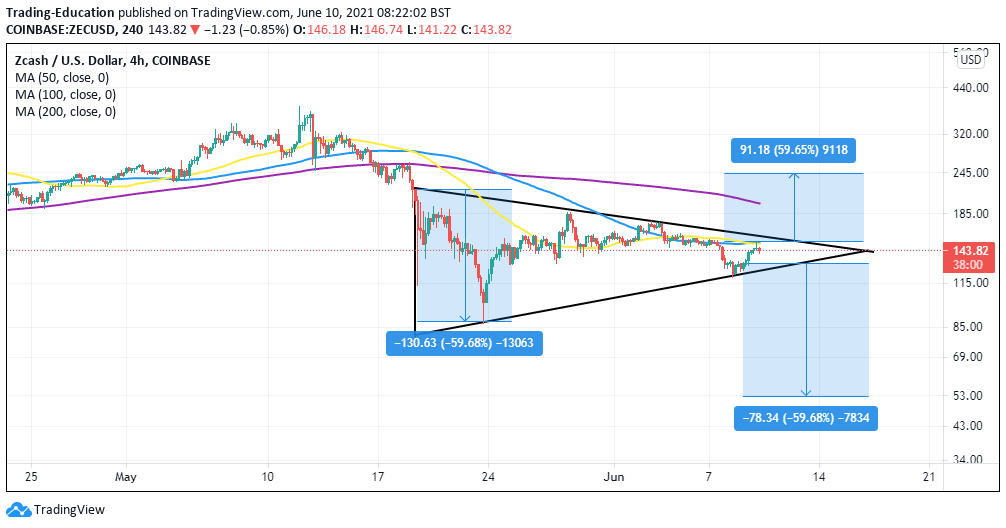 IntoTheBlock's "Daily New Addresses" on-chain metric highlights a slump in the number of new addresses joining the Zcash protocol, tracked on a 30-day trailing average. At the moment, the addresses average at 1,750 per day from a 30-day high of 8,900. More significantly is the recent drop from 5,000 addresses created on the network on June 8.

The recent drop cannot be ignored, especially with cryptocurrencies bleeding across the board. A low or declining network growth is a bearish signal because it interferes with the regular inflow and outflow of tokens on the network. Moreover, it shows that adoption is going down and, by extension, the level of speculation.

The symmetrical triangle can also result in a 59% upswing to $245, completely sabotaging the downtrend to $53. However, bulls must make a daily close above the confluence resistance at $150 to push the price above the triangle's upper trendline.

Zcash
ZEC
Top Brokers in
All Regulated Brokers
67% of retail clients lose money when trading CFDs with this provider.