Ripple Price Analysis: XRP Back to the Drawing Board as Declines to $0.8 Beckon

Ripple will likely usher in the weekend session while bleeding. The week's accrued gains above $1 are in jeopardy after the bearish grip tightened on Friday during the Asian hours. The losses have stretched into the European session, with XRP trading at $0.94.

The international money transfer token has already lost several key levels, including the former intermediate support at $1, as highlighted by the 100 Simple Moving Average (SMA) and the 50 SMA on the four-hour chart.

The general technical picture affirms that the slightest resistance path is downward. For instance, the Relative Strength Index (RSI) moves fast toward the oversold region. Note that this indicator follows an asset's trend and calculates its strength. Movement under the midline and heading to the oversold area reveals the bearish tightening grip.

At the same time, the Moving Average Convergence Divergence (MACD) indicator has presented a sell signal. The recovery levels around -0.13 (tested in May) stalled at 0.029, suggesting that the uptrend had lost momentum. Meanwhile, the MACD line (blue) crossing under the signal is a massive bearish signal. If the technical picture remains unchanged in the short term, Ripple will drop further toward $0.8. 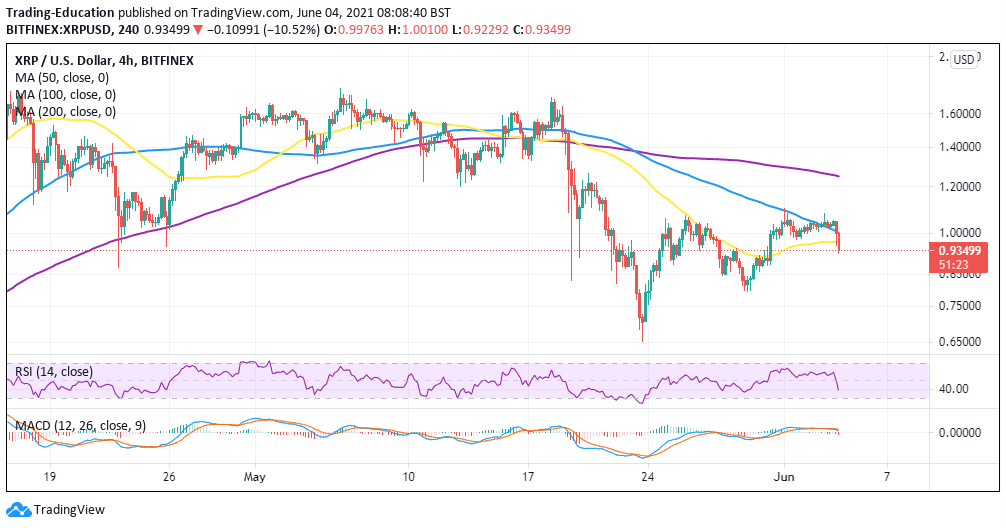 The SuperTrend indicator follows the trend of an asset, just like the moving average system. According to the 12-hour timeframe, a sell signal presented on May 19 still holds, insinuating that Ripple could have entered a long-term downtrend.

A sell signal manifests in the SuperTrend by changing red from green and flipping under the price. It shows that selling pressure is spiking while losses increase momentum. If XRP fails to hold at $0.9, buyers will be forced to seek refuge at $0.8. 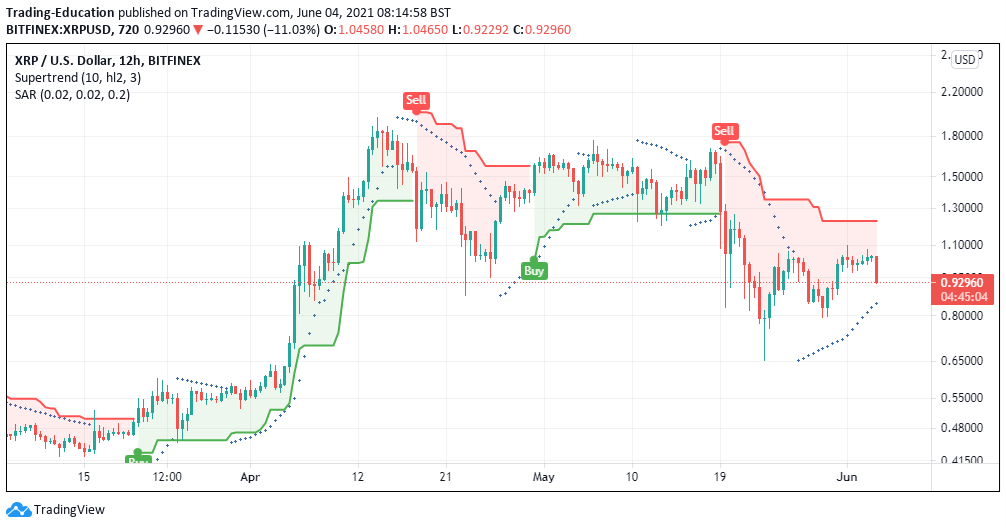 The Parabolic SAR gives an insight into the general trend of an asset. If correctly used, it identifies possible entry and exit positions. Some traders refer to the Parabolic SAR as the "stop and reversal system." The indicator prints a series of dots (parabolas) on the chart, tracking the price accordingly.

Typically, a bullish Parabolic SAR is printed under the prevailing market price, implying that the trend is generally upward. On the other hand, a bearish parabola manifests above the asset's price and indicates downward movement.

Therefore, with the parabolas still below the price, it calls for patience and investors to avoid panicking. Support at $0.9 could be robust enough to hold, thus bringing back stability and perhaps restarting the uptrend above $1.