Ripple price appears to be in a general uptrend despite the sluggish price action. The resistance at $0.74 last week cut short the uptrend targeting $1. Moreover, bears took advantage of the exhausted bullish camp to increase their entries. At the time of writing, Ripple price trades at $0.67 amid a seemingly bearish technical outlook.

The four-hour chart illustrates the formation of a bear flag pattern. This is a continuation pattern for an existing bearish trend. It emanates from an initial strong move south, succeeded by a consolidation channel heading upward, as shown on the chart.

Note that the strong move down is a flag pole, and the consolidation is the flag. Traders look for the price to break the lower trend line of the flag pattern before 50% of the flagpole. Usually, an entry position comes after a confirmed break below the channel. The breakout primarily extends 38% of the length of the flagpole.

Thus, Ripple is likely to extend the bearish price action to $0.5 before another recovery comes into the picture. It essential to wait for the confirmation of the breakdown to avoid false signals. 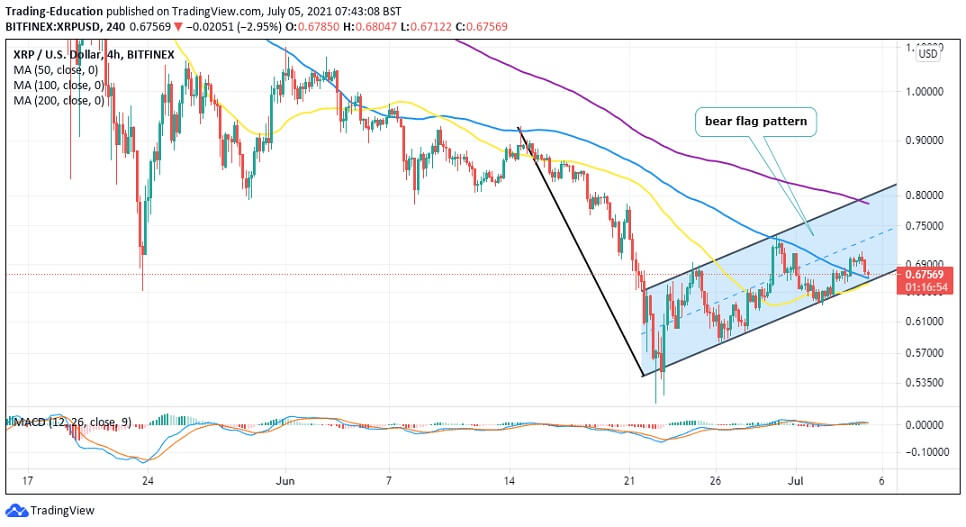 A golden cross pattern will likely come into the picture in the near term. This technical pattern will develop the moment the 50-day moving average crossed above the 100-day moving average. Some of the most prominent technical analysts in the industry see this pattern as one of the most definitive buy signals that could start Ripple’s next recovery mission toward $0.8.

Following these bullish formations, Ripple is expected to resume a formidable upswing. A break above $0.7 may help validate the upswing while bringing XRP closer to $0.8.

In addition to the golden cross, the moving average convergence divergence, or MACD, adds credence to the optimistic outlook.

This technical indicator, which follows a trend path and calculates its momentum, appears to be flipping bullish in the same timeframe. As the 12-day moving average crossed above the 26-day moving average, the odds for a bullish impulse increased significantly.