For a little over two weeks, Ripple has been consolidating inside a symmetrical triangle formation. After repeatedly failing to break past the $0.628 resistance line, the bears took over and managed to take the price below the 20-day SMA. The 4-hour timeframe shows that the 20-bar SMA is acting as short-term resistance.

After failing at the $0.621 resistance, the price dropped sharply to the $0.527 support wall. The buyers managed to regain control and jumped back up, but the 20-bar SMA eventually stalled them. The MACD shows that the market momentum is about to reverse from bearish to bullish, which may hint that the buyers may attempt to crossover the 20-bar SMA barrier again in the near future.

By widening our timeframe, we can better understand what’s going on in Ripple’s price action. 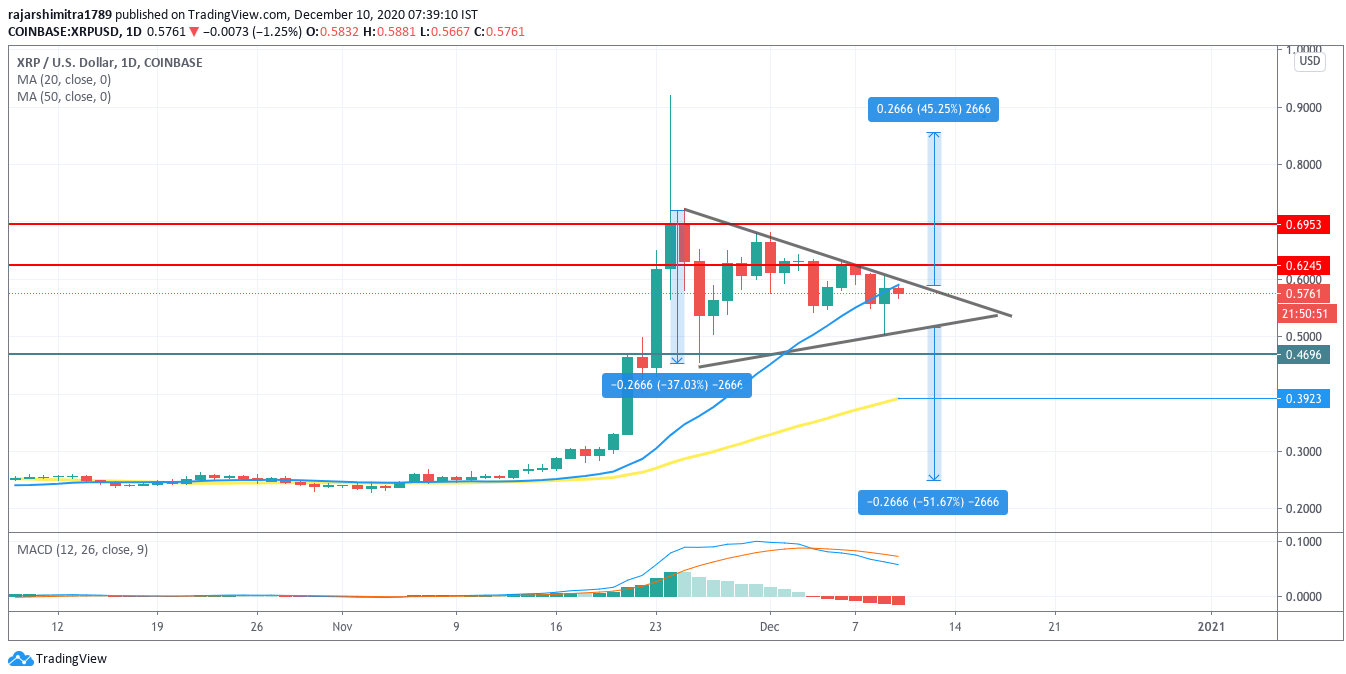 As mentioned before, XRP is trying to consolidate itself in a symmetrical triangle pattern. In the one-day time frame, the MACD shows that market momentum is overwhelmingly bearish, and the latest candlestick has opened below the 20-day SMA. If the price breaks below the triangle, the price target will be around $0.25, as per the technical analysis.

Whales are busy buying the dip

As per Santiment’s holders distribution chart, the number of addresses holding at least 10 million XRP (~$5.75 million) has increased by 8 over the last two days. That’s a 2.5% rise in a little over 48 hours.

It’s pretty evident that the whales are being smart and strengthening their positions while the price is still manageable.

In the 4-hour timeframe, the price needs to cross the 20-bar SMA ($0.585) to continue their short-term uptrend. However, in the daily price chart, if Ripple breaks below the symmetrical triangle, the key price level is the 50-day SMA ($0.392), as it is the only support line of note on the downside.

However, if the buyers somehow manage to turn things around and break above the triangle, the key resistance barrier for the price will be the 0.695 line, which had managed to stall the cross-border remittance token before.