Between April 15 to April 25, the Ripple price has crashed from $1.83 to $1.03, losing almost $0.80 in overall valuation. During this downward surge, XRP managed to reverse the 20-day SMA from support to resistance. Let’s take a closer look with technical analysis.

Ripple price shot up from $1.03 to $1.40, gaining almost 35% in its overall valuation since Monday. However, the overall market sentiment seems negative due to the following signs: 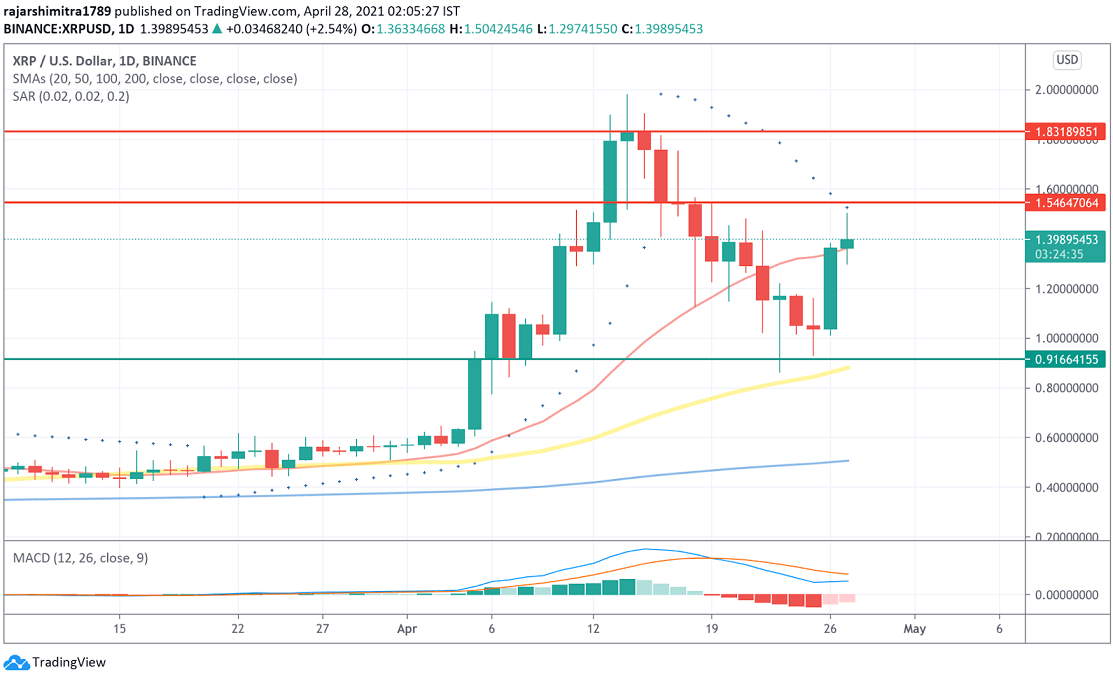 In the 4-hour Ripple price chart, XRP has been trending horizontally after climbing up along the upper Bollinger band. The 20-bar SMA has crossed over the 50-bar SMA to form a bullish cross, which is a positive sign.

Ripple Lawsuit Summary: The How, What, and Why

In December 2020, the US Securities and Exchange Commission (SEC) filed a lawsuit against Ripple on three counts. First, raising $1.3 billion worth of capital through a sale of undocumented digital currencies to customers.

Second, for allegedly issuing an undisclosed amount of XRP as a means of payment for services of labour and other promotional activities without due documentation. Third, for an additional private covert sale by the company’s founders, Bradley Garlinghouse and Christian Larsen, to the tune of $0.6 billion.

The central question of the lawsuit is whether XRP is a security. According to the description by Ripple and many investors, XRP is just an asset or a commodity. They opine that it is not bound to be subject to the rules and regulations of securities as stipulated by the SEC.

On the other hand, the SEC thinks otherwise and chooses to view the alleged violative transactions made by Ripple in the light of the 1946 Howey test for determining securities. The test defines a security as any type of contract for investment, where sums of money are given by members of the public.

Currently standing strong with a market cap of over $55 billion as the fourth most valuable digital currency, over 60% of its value has so far been lost and doubly regained since the XRP’s legal entanglement.

Many platforms and partners like MoneyGram and Coinbase have discontinued transactions with XRP on their platforms. Essentially, this means that the strength of the digital asset has since shifted from the US and Europe. Ripple's revenue is now mainly stemming from its growing user base in Asia, which has remained unaffected by the US legal kerfuffle.

The next important decider date for the advancement of the case is in August, and Ripple hopes the new SEC chairman, Gary Gensler, would help free the company of the current legal shackles.

The Ripple price will likely jump to the $1.55 resistance barrier.