Ripple recently held onto support at $1.2, allowing bulls to come in and take control. The flagship cross-border money transfer token has in the last few weeks struggled to sustain the uptrend to $2. The resistances at $1.6 and $1.8 have been a hard nut to crack, leading to sporadic corrections toward $1.

In the meantime, support at $1.2 allowed more investors to enter the market, thus building the foundation for ongoing recovery. XRP is exchanging hands at $1.51 after overcoming hurdles at $1.4 and $1.5. If the technical picture improves, Ripple will extend the bullish action past $1.6, in turn setting the ground for another technical breakout.

Ripple draws nigh to a strategic triangle breakout

Ripple currently dances within the confines of an ascending triangle. This is a technical bullish continuation pattern. However, the pattern must meet certain conditions, such as a trend line connecting a series of ascending lows and a horizontal line (x-axis) linking the relatively equal peaks.

An ascending triangle shows that bulls get stronger as the price forms a higher low pattern. A breakout is anticipated at the x-axis and results in a rapid upswing. Since it’s a continuation pattern, an ascending triangle forms in a generally up-trending market.

Simultaneously, the pattern will start to take shape as the market consolidates. As the price rises gradually, buyers intensify their grip, and sellers experience exhaustion, leading to a breakout equal to the distance between the highest and lowest triangle points.

For instance, Ripple may be bolstered to new record highs of $2.7 if the ongoing uptrend cracks the x-axis resistance. It is worth keeping in mind that the 50 Simple Moving Average (SMA) on the 12-hour chart provides the much-needed support to allow bulls to lift the price higher. 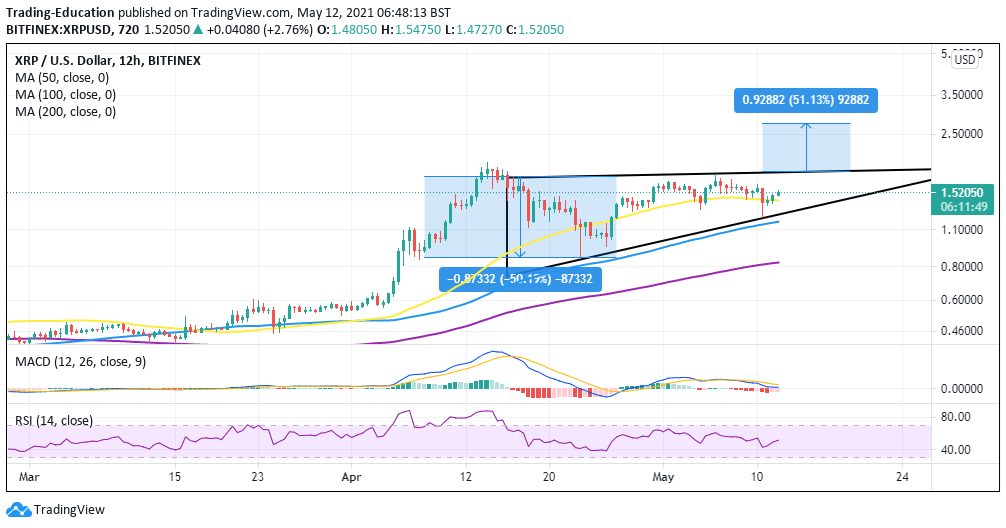 Ripple’s recovery has been reinforced by the market value realized value (MVRV) model, as observed on the chart below. Over the last three weeks, this on-chain metric reset from highs of 120% to levels slightly under zero. The retreat occurred as investors sold tokens to take profit.

However, currently, the MVRV model shows that Ripple is back in a buy zone. Most investors are either at a loss or are yet to break even and are unlikely to sell. As investors hold onto their tokens, overhead pressure reduces, allowing the price to recover.

The Moving Average Convergence Divergence (MACD) on the same four-hour chart suggests that XRP is not out of the woods yet. The indicator’s bearish impulse came into the picture after the MACD line (blue) crossed under the signal line. Therefore, failing to close the day above the 50 SMA may trigger losses toward $1.2 and $1, respectively.