Ripple Price Analysis: XRP Holds Within the Buy Zone, Ignoring the Quagmire at $1

Ripple lost some ground after suffering a rejection above $1 on Wednesday. Support has been secured at $0.9 on the downside, allowing bulls to champion another recovery attempt. In the meantime, XRP trades at $0.99 while buyers deal with the seller congestion at the 50 Simple Moving Average (SMA) on the four-hour chart.

The international money transfer token finds it challenging to sustain rice action beyond $1. As mentioned, the 50 SMA currently hinders the uptrend, delaying the recoil from the solid support at $0.9.

Meanwhile, the Relative Strength Index (RSI) has a bullish signal, especially after holding above the midline. As the trend strength indicator moves to the overbought region, more buyers are bound to come from the sidelines, anticipating a significant upswing to levels around $2. 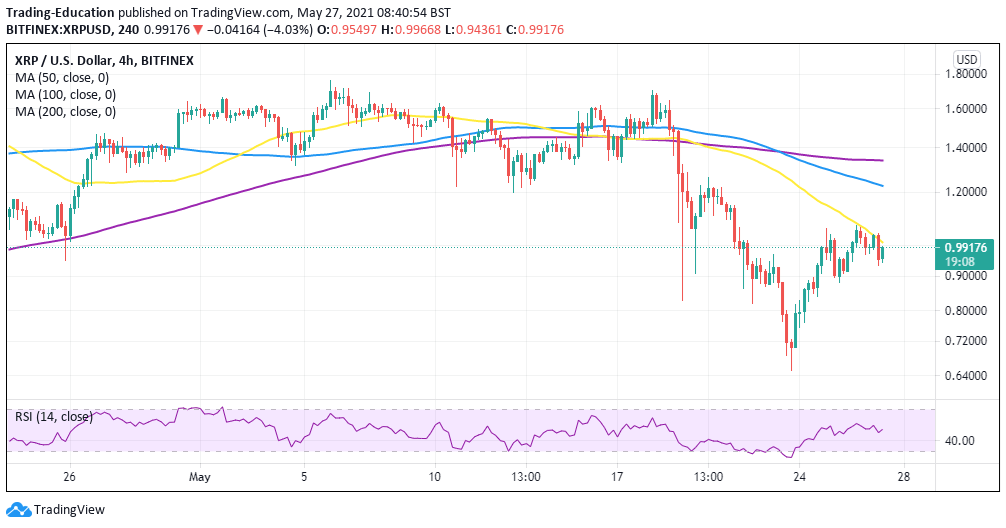 It is essential to realize that a daily close past $1 is needed to ascertain bullish control and pave the way for the ultimate liftoff. Another critical milestone would be cracking the hurdle at $1.2, as highlighted by the 100 SMA.

According to Santiment’s market value realized value on-chain model, Ripple is in an optimum buy zone. This indicator tracks the profit or loss of the holders of XRP tokens moves within the last 30 days analyzed against the price at which each previously moved.

Following the price drop last week, the MVRV ratio plummeted to -40. This is a meager figure suggesting that most holders were at a loss. At the time of writing, the metric holds at -22 amid a progressive recovery.

In other words, Ripple is in a buy zone accentuated by less selling pressure because holders tend to hold when the MVRV ratio is low. As more and more investors return to the market, XRP will assume the trajectory heading to $2.

Santiment’s network growth on-chain model has a bearish signal. This model follows the number of addresses joining the XRP Ledger every day. As illustrated on the chart below, a declining network growth interferes with the regular inflow and outflow of tokens, making it difficult for bulls to sustain an uptrend.

Roughly 3,900 addresses joined the network on May 26, compared to a 30-day high of nearly 8,000 recorded on May 11. It is worth noting that recovery is shaky based on the downward pointing metric. Therefore, sustaining the trend above $1 may be hard to crack, perhaps leading to another correction.