Ripple has been steady with the recovery from the dip to $0.85 in April. However, the tug of war between the bulls and the bears has intensified in the past few days with XRP settling consolidation. Meanwhile, the cross-border value transfer token trades at $1.6 at the time of writing. The formation of an inverted head-and-shoulders (H&S) pattern points at a potentially massive upswing.

The international money remittance token fights to make a confirmed break past $1.6. The sideways trading comes after stepping beyond the inverted H&S pattern, as seen on the chart. This pattern is highly bullish and tends to signify the beginning of an uptrend. 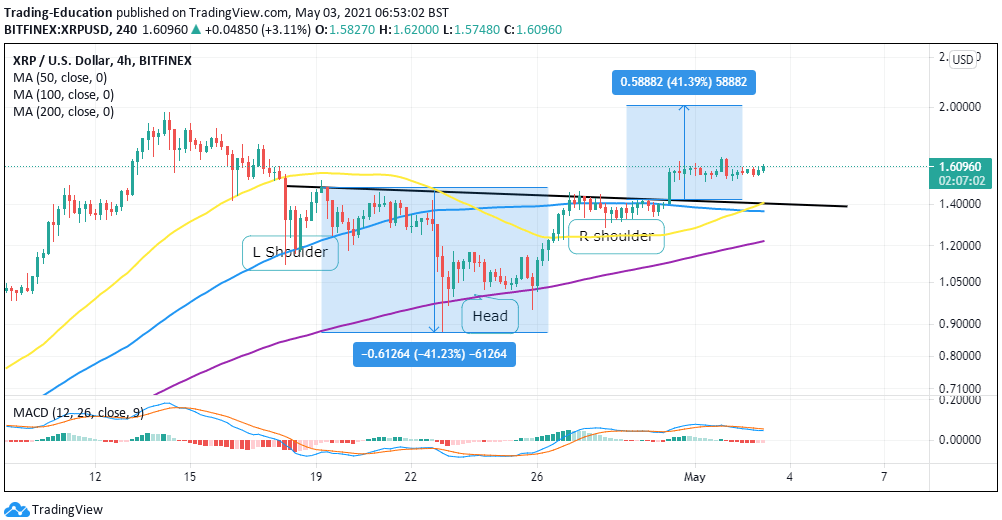 In the meantime, Ripple seems to have entered a consolidation period that has forced the Bollinger bands to squeeze on its four-hour chart. Squeezes indicate low volatility periods and are usually succeeded by significant price movements. The longer the squeeze, the higher the probability of a strong breakout.

This technical index does not provide a clear path about the direction of Ripple’s trend. As a result, the area between the lower and upper band is a reasonable no-trade zone. Note that only a four-hourly candlestick close above or below this area will determine where the pioneer cryptocurrency is headed next.

The Moving Average Convergence Divergence (MACD) also confirms the sideways trading by leveling within the positive region. The trend will flip bullish if the MACD line (blue) crosses above the signal line.

On the other hand, the uptrend could fail to materialize if support at $1.6 caves. Overhead pressure is bound to occur with Ripple seeking a lower support zone, perhaps at $1.4 and $1.2, respectively.