Ripple lifted from the support at $0.65 following a downswing from May highs of $1.78. Last week’s selloff embraced the support at $0.8 and gained ground to $1.2. However, another bearish wave in the cryptocurrency industry over the weekend extended the bearish action to $0.65.

Meanwhile, the bullish reversal on Monday closed the gap to $1 after reclaiming the descending channel’s middle boundary support. As discussed, XRP has extended the price action above $1. The primary goal is to overcome the channel’s upper edge resistance. Moreover, a confirmed breakout above $1 will encourage investors to join the market.

Ripple nurtures an uptrend above $1

The prevailing technical outlook affirms that the uptrend may be gradual but is consistent. A comprehensive look at the Moving Average Convergence Divergence (MACD) shines a light on an improving technical picture.

Note that MACD follows the trend of an asset and measures its momentum. This indicator can help identify positions to buy the dip and sell the top when used correctly. For example, a buy signal occurs when the MACD line (blue) crosses above the signal line. Similarly, more buyers will be encouraged to buy in as the MACD lifts into the positive region. 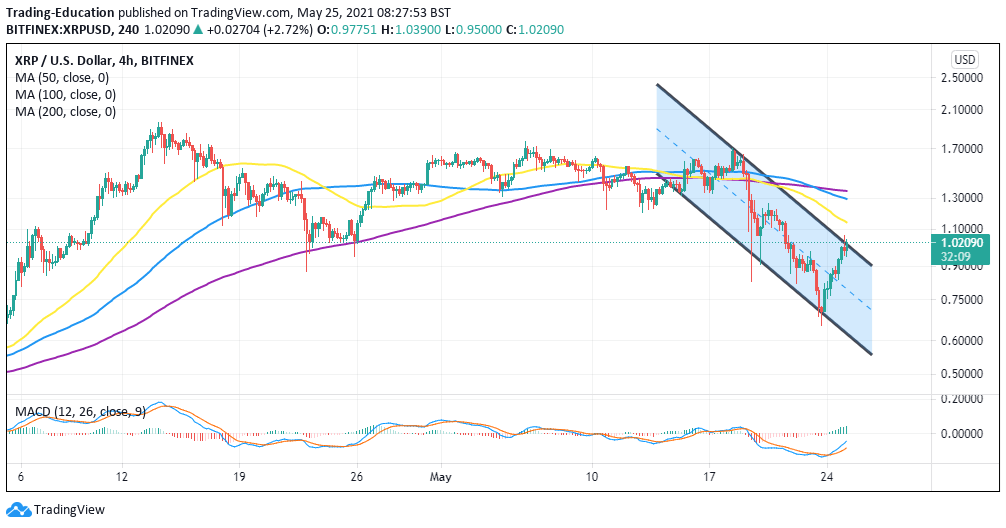 According to Santiment, improving network growth is a bullish signal. As reported on Monday, this metric has been on a downward trend for the past couple of weeks. However, the number of new addresses joining the network seems to have bottomed at 4,085. An average of 4,400 addresses joined the XRP Ledger on May 24. If the uptrend continues, the price will lift to higher levels, perhaps settle above $1.3.

Ripple must make daily close above $1 to validate the uptrend. A confirmed break above the channel’s middle boundary support will also be a formidable bullish signal. On the flip side, if XRP closes the day beneath $1, overhead head pressure may surge and force a correction back to $0.9. In weak support levels, the bearish leg may extend to $0.75 and $0.65, respectively.