Ripple seems to have stabilized above after gaining significant grounds from last week’s trip to $0.8. The ongoing recovery was supported by positive investor sentiment following Judge Sarah Netburn’s ruling that favored Ripple Labs in the ongoing case against the US Securities and Exchange Commission.

Ripple consolidates ahead of the ultimate breakout to $2

Ripple hit a snag at $1.1, reinforced by the 50 Simple Moving Average (SMA) on the four-hour chart. The barrier has delayed the upswing, but Ripple seems to have settled around $1. Note that its downside is protected by the 50 SMA, ensuring that losses toward $0.9 are averted.

The four-hour SuperTrend indicator has recently turned bullish, adding credibility to the foreseen liftoff. This trend is an overlay on the chart, resembling a moving average. It reveals the current trend direction. The SuperTrend functions best in trending markets which call for caution when used in a ranging market.

The average true range is utilized in the SuperTrend’s calculations and helps account for market volatility. A multiplier setting is used to determine how sensitive the indicator is. When the SuperTrend flips green and moves below the price, a buy signal is generated, much like the prevailing XRP outlook.

On the other hand, if the price closes below the line, it flips from green to red, sending a sell signal. 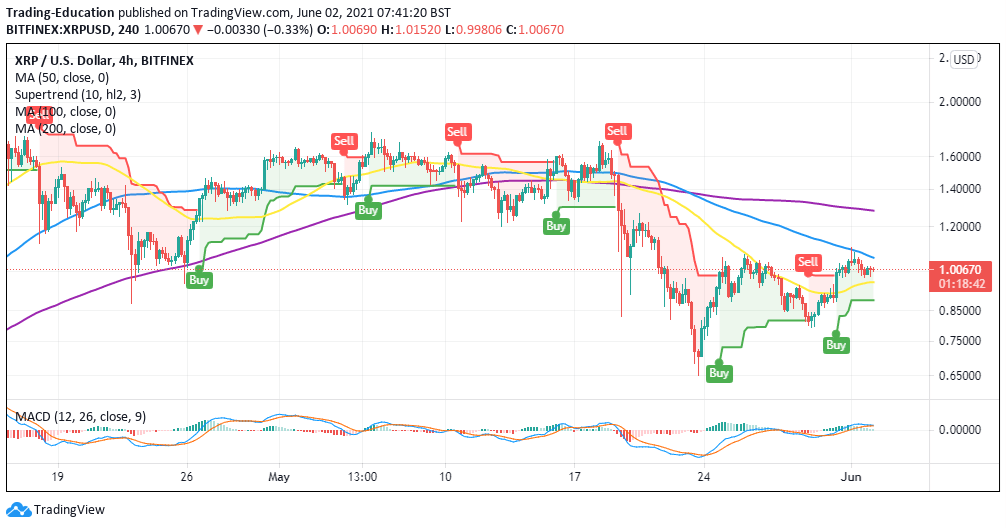 The Moving Average Convergence Divergence (MACD) adds weight to the impending uptrend. It follows that the momentum indicator has crossed into the positive territory, suggesting that the trend favors the bulls. However, buyers must sustain the price above $1 and focus on closing the day above the 50 SMA.

The market value realized value (MVRV) on-chain model by IntoTheBlock brings a bullish building momentum to light. According to Santiment, this on-chain metric tracks the profit or loss of the holders of XRP tokens moved over the last 30 days analyzed against the price at which each of the tokens previously moved.

A low MVRV ratio infers that most investors are at a loss and, therefore, are unlikely to sell. In other words, it is advisable to buy because eventually, the price begins to rally. For instance, Ripple’s MVRV ratio dropped to -40% during the crash in May but has recovered to -12%. The increase suggests that investor speculation is rising as bulls focus on lifting the price to higher levels.