Ripple is still leading bullish price action in the cryptocurrency market following the colossal increase in price amid the long Easter weekend and Tuesday. For the first time in three years, the cross-border digital asset exchanged hands above $1. Moreover, extended the bullish action to $1.1 before bulls started to lose steam.

Ripple is doddering at $1.04 at the time of writing. The hurdle at $1.1 made it difficult for bulls to slice through, hence the need to secure higher support from where they will strategize on the next move to $1.7.

Meanwhile, it is essential to look back at the symmetrical triangle on the 12-hour chart. The breakout at the upper trendline contributed to the bullish action in the past few days. However, the 200% breakout target is yet to be achieved. Perhaps this is why bulls are relentless in the push for support above $1, which will allow for gains toward $1.7. 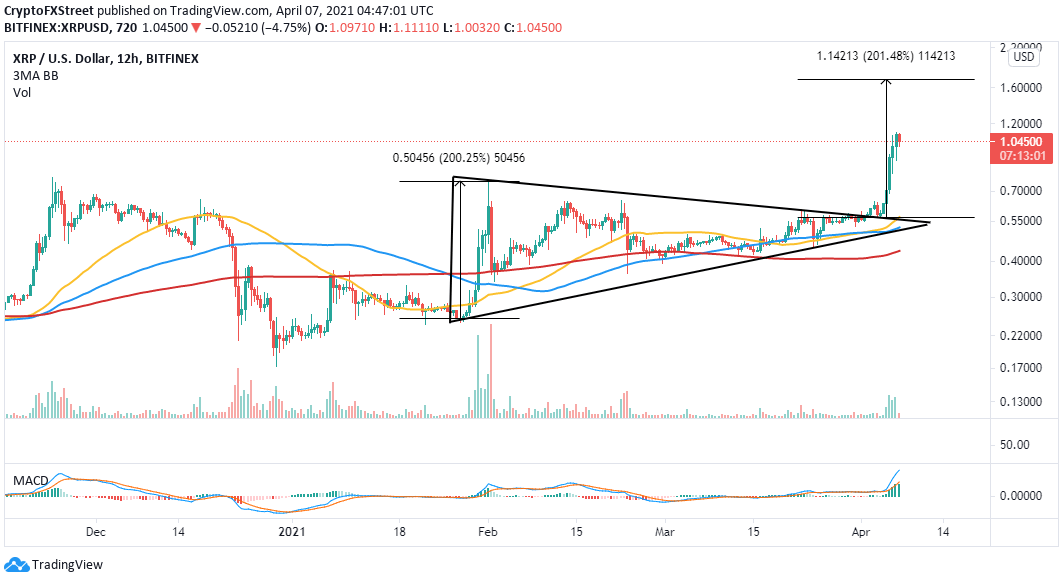 The bullish narrative has been cemented by the Moving Average Convergence Divergence (MACD) indicator on the 12-hour chart. For instance, the MACD line (blue) makes a wide gap above the signal line, confirming buyers' control.

According to Santiment, the number of unique addresses involved in XRP transactions daily has also been on a persistent rise. The on-chain metric shows the daily user interaction level, otherwise referred to as speculation.

A spike such as the one illustrated on the chart suggests that the XRP Ledger is experiencing massive network activity, hence the supported rally. XRP will likely extend the uptick further up, closing the gap toward the triangle breakout target.

The market value realized value (MVRV) ratio, an on-chain metric by Santiment, reveals that most XRP holders realize profits. The metric tracks the average gain or loss of XRP tokens transferred over the last 30 days compared to the price when each token last changed hands.

A rising MVRV ratio suggests that holders are witnessing profits. Note that investors tend to sell when at a profit and prefer to hold when at a loss. At the time of writing, the MVRV stands at 73.5%, a level not seen in the last 30 days. Therefore, there is reason to proceed with caution to avoid potential price correction, likely to liquidate most holders.