As per Santiment, Ripple has been dominating the crypto media over the past 24 hours. 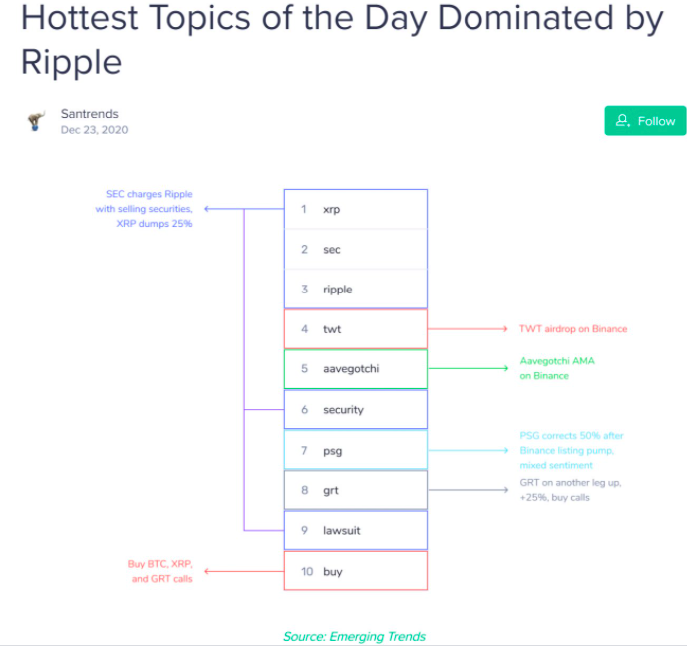 For those in the know, this is not a surprise at all. The fact that Ripple is on the verge of receiving a lawsuit from SEC has had a devastating effect on XRP’s price action. As a result, Ripple has dropped below Tether in the top 10 cryptocurrencies by market cap list.

As the US Securities and Exchange Commission’s (SEC) lawsuit against Ripple approaches, the company’s CEO Brad Garlinghouse has shared a note to his employees. While calling the news “incredibly frustrating,” Garlinghouse also emphasized his willingness to fight on.

He asked his employees not to worry about the lawsuit, which he expects to drag on for a long time:

What I DON’T want is for you to worry. We will get through this, and we will prove our case in court. We have a phenomenal legal team and like I said, we are on the right side of the law to begin with. Know, however, that the legal system is slow, and this is just the beginning of a long, civil process.

The SEC announced its charges against Ripple recently. The watchdog accused Ripple of netting an estimated $1.3 billion through an “unregistered, outgoing” XRP offering. Jake Chervinsky, general counsel for Compound, says that the complaint is “quite bad” for Ripple.

This is quite bad for Ripple. Not exactly worst case, that'd be securities fraud, but close. XRP is basically useless if deemed a security. Alleging violations through present day is a kill shot.

The suit targets Garlinghouse and former CEO Chris Larsen. The aforementioned note also says that the two executives had an option to settle separately, but they chose to fight instead.

MoneyGram has said that it has not yet experienced any “negative impact” in its long-standing business arrangement with Ripple. The payments company said this as the US Securities and Exchange’s (SEC) lawsuit against Ripple is fast approaching.

According to a Coindesk report, a MoneyGram spokesperson said:

MoneyGram will continue to monitor the situation as it evolves. MoneyGram has continued to utilize its other traditional FX trading counterparties throughout the term of the agreement with Ripple.

The SEC has alleged Ripple of using its XRP token to conduct an ongoing, $1.3 billion sale of unregistered securities. Ripple owns over 4% of MoneyGram and paid MoneyGram $9.3 million earlier this year for providing liquidity for Ripple’s XRP-based cross-border settlement network. All in, Ripple has given MoneyGram $52 million for using Ripple’s on-demand liquidity (ODL) service.

MoneyGram has leveraged Ripple’s ODL to move in and out of four currencies since June 2019. In SEC’s complaint, the authority appears to mention MoneyGram when it alleges that “onboarding onto ODL was not organic or market-driven” but rather “subsidized by Ripple.”

Although MoneyGram was not identified by name in the complaint, it did specify that Ripple paid the unnamed money transmitter $52 million in fees through September 2020, in an arrangement that began in 2019. SEC went on to allege:

The Money Transmitter became yet another conduit for Ripple’s unregistered XRP sales into the market, with Ripple receiving the added benefit that it could tout its inorganic XRP ‘use’ and trading volume for XRP.

Vitalik Buterin, the CEO of Ethereum, criticized Ripple for implying that the Chinese government controls Bitcoin and Ethereum. In an earlier article titled “Summary of Ripple’s Wells Submission,” Ripple’s team alleged that XRP is a better asset than BTC and ETH because of wider adoption and its inability to be centralized by the Chinese government.

An excerpt from the article reads:

Policy reasons counsel against finding XRP to be an investment contract.

A. Innovation in the cryptocurrency industry will be fully ceded to China. The Bitcoin and Ethereum blockchains are highly susceptible to Chinese control because both are subject to simple majority rule, whereas the XRPL prevents comparable centralization.

In response to this, Buterin called XRP a “shitcoin.”

All of this comes after the SEC has filed a lawsuit against Ripple, in which it claimed that Ripple used XRP to conduct an ongoing, $1.3 billion sale of unregistered securities.

Over the last five days, the cross-border remittance token has dropped from $0.584 to $0.26, falling by nearly 55%. The MACD shows that the bearish market momentum is steadily increasing. This means that the price may drop even more.

During this dramatic drop, XRP has fallen below the 20-day, 50-day, and 200-day SMA, along with the lower Bollinger Band. Looking at the price history, there is critical support at $0.172. If this doesn’t hold the price up, it could be absolutely devastating for XRP.