Between August 9 and August 11, the Ripple price jumped from $0.775 to $1.01 as the buyers took full control of the market. However, this rally has pushed the relative strength index (RSI) into the overbought zone indicating that the asset is overpriced. This incited a slight bearish correction this Thursday, wherein Ripple dropped to $1.

Looking at the daily Ripple price chart, we can see that between July 21 to August 7 XRP jumped from $0.53 to $0.82. During this jump, RIpple managed to flip the 20-day, 50-day, and 200-day SMAs from resistance to support and reverse the parabolic SAR from negative to positive.

In the 4-hour time frame, we can see that the Ripple price had gone through a massive bullish rally which pushed it above the Bollinger Band. However, the recent bearish correction has taken Ripple back inside the Band. 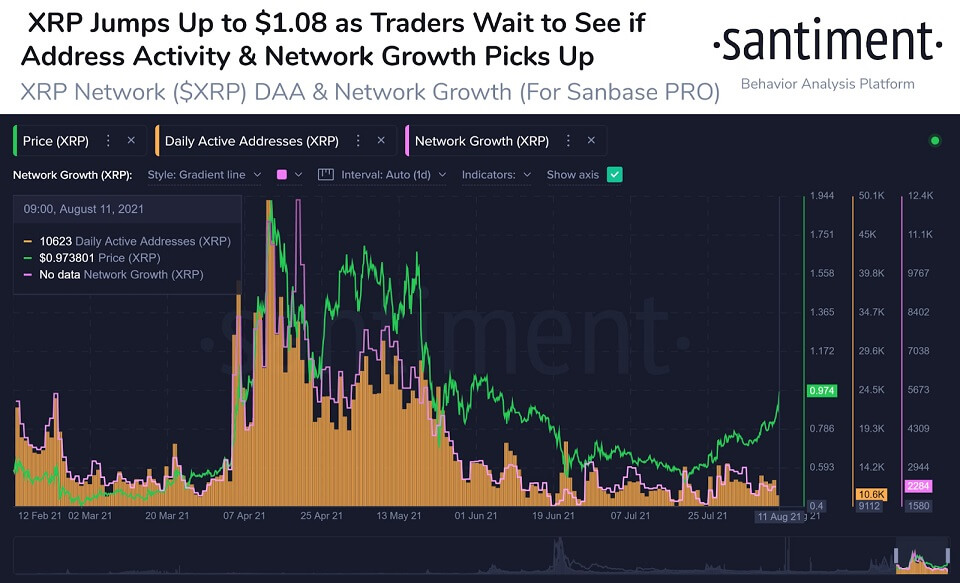 "$XRP is enjoying a+18% day on a nice decoupling from $BTC and the rest of #crypto currently. Watch for an uptick in the address activity (unique addresses interacting daily) & network growth (new addresses created), which would push this rally further."

Despite the ongoing Ripple-SEC, Ripple has recently struck a few important deals. As per earlier reports, Ripple partnered with a major payments provider in South Korea, GME Remittance, via its partner, SBI Ripple Asia. The goal is to improve the system of payments from South Korea to Thailand.

The Ripple price may face a correction soon due to RSI indicating that it’s overbought. In that case, the $1 psychological level must hold strong.