On July 21, the Ripple price flashed a buy a signal in the form of a red-nine candlestick in the TD sequential detector. Following that, it rose from $0.53 to $0.74 till July 28 – flipping the 20-day and 50-day SMAs from resistance to support. However, on July 30, Ripple flashed a sell signal with a green-nine candlestick on July 30 and has been hovering horizontally around $0.75.

In the 4-hour time frame, the Ripple price has been on a steady up climb. XRP was on the verge of getting overvalued due to the following:

However, things have since returned to normal.

The average daily trading volume of the XRP token has surged in Q2 2021, despite the ongoing legal dispute involving Ripple and the US Securities and Exchange Commission (SEC).

As per Ripple's market report, the daily trading volume of XRP doubled to $4.49 billion per day on average. This is up from $2.26 billion recorded during Q1 2021.

XRP’s trading volume surged during the quarter amid heightened volatility in the market, which saw the prices of most cryptocurrencies initially surge along with Bitcoin, which hit a new all-time high near $64,000 earlier this year, before plunging to less than $30,000. 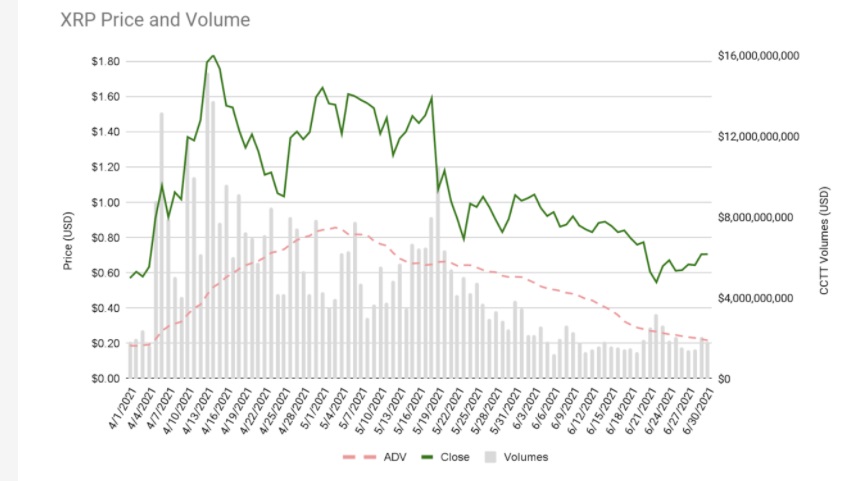 Ripple noted that despite the trading volume increase, XRP’s price was volatile, as was the rest of the cryptocurrency market. Behind the volatility, Ripple pointed to an umber of events, including ransomware attacks, environmental concerns, Elon Musk’s tweets, and regulatory scrutiny, among others.

The firm sold a total of $157.92 million worth of XRP during the second quarter of the year, up from $150.34 million in the first quarter. Ripple pointed out that regulatory crackdowns from several jurisdictions impacted the cryptocurrency market, as did high inflation expectations in the economy.

The cryptocurrency’s price and trading volumes have been holding despite the SEC’s lawsuit against Ripple and two of its executives. The SEC’s lawsuit alleges they “raised over $1.3 billion through an unregistered, ongoing digital asset securities offering.”