The bears have been in complete control of the Ripple price between May 19 and May 23, as it chased from $1.58 to $0.785 – losing 50% of its overall valuation. During this crash, XRP managed to flip the 20-day and 50-day SMAs from support to resistance. Let’s take a closer look with technical analysis.

The 200-day SMA has stopped the Ripple price from dropping any further. Looking at the TD sequential detector, XRP is on the verge of charting a buy signal in the form of a red-nine candlestick. This tells us that while XRP may drop for two more sessions, the buyers are going to gain momentum to attack the $1-mark again. The relative strength index (RSI) is trending at the edge of the oversold territory, which tells us that a drastic move is in the cards.

In the 4-hour Ripple price chart, XRP has bounced up from the $0.70 support wall and flipped the 20-day SMA from resistance to support. During this upward surge, Ripple has flipped the parabolic SAR from negative to positive and the MACD shows increasing bullish market momentum. So XRP will likely attack the $1 resistance barrier again and take down the 50-day SMA.

Barry Silbert, the CEO of the Digital Currency Group, recently asked what if there was one company that was "behind most of the Bitcoin energy usage FUD?" The replies to this ambiguous question stirred a lot of speculation within the community. CoinShares’ Meltem Demirors said that Ripple has been a catalyst behind the now widespread Bitcoin counterpart narrative that relies on the cryptocurrency’s heavy use of electricity and environmental costs. 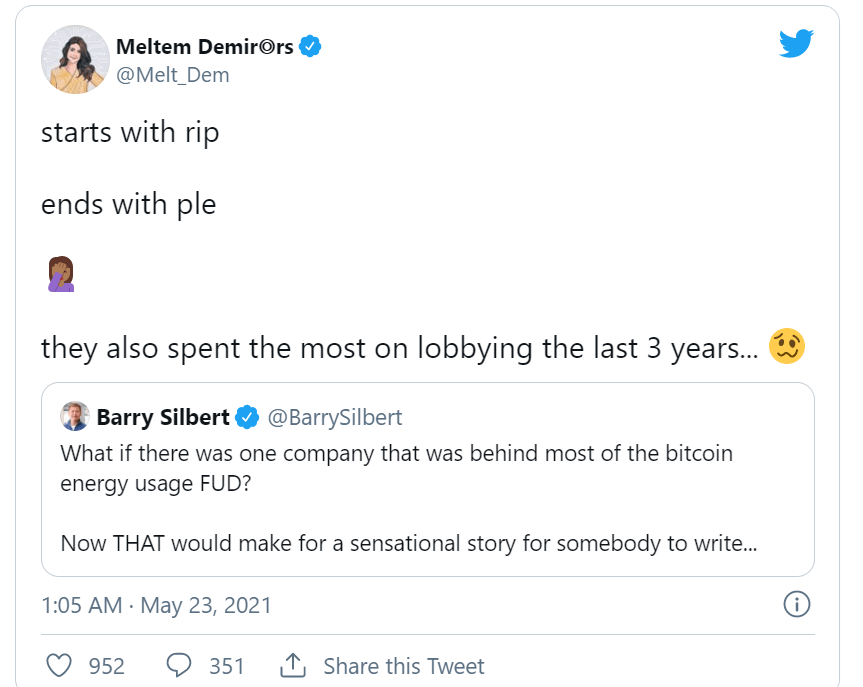 Demirors also pointed out the firm’s heavy lobbying activities over the past few years. Ripple, a recent signatory to the Crypto Climate Accord (CCA), has invested heavily in the same, with reports suggesting that its lobbying charges amounted to $690,000 in 2020.

Over the past couple of years, Ripple CEO Brad Garlinghouse has often criticized Bitcoin’s intensive energy consumption and transaction costs. 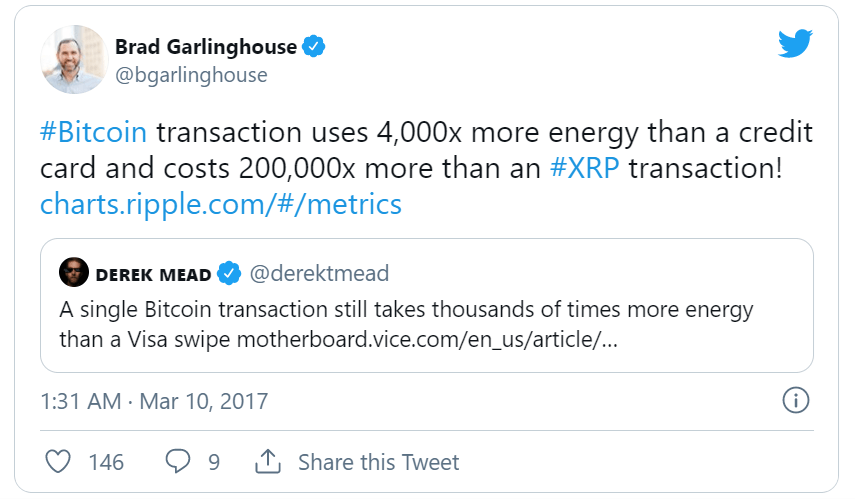 Garlinghouse has not been the only one to do so. Ripple exec Chris Larsen has also railed against BTC in the past, with Larsen often taking issue with BTC’s PoW consensus. In a recent interview, he suggested that Gary Gensler’s SEC would focus on “green currencies,”

In April, Garlinghouse shared a series of tweets to underline his determination to work together and make the entire crypto-space as sustainable as possible to change Musk, Gates, and others’ opinion. He had said:

We have the tools to make crypto 100% renewable AND reach its full potential. Let’s focus on the solutions to change the opinion of Janet Yellen, Bill Gates, and countless others who have pointed out concerns about energy usage instead of accusing me of FUD.

If our bullish hypothesis is correct, then the buyers will likely push the Ripple price up to $1 psychological level. Upon doing that, the Ripple price will need to jump to $1.35 and reverse the 20-day and 50-day SMAs from resistance to support.