Looking at the daily Ripple price chart, the relative strength index (RSi) shows us that XRP has enough space to grow after the $0.57 resistance barrier is conquered.

Now, when you see the 4-hour Ripple price chart, the parabolic SAR shows that the overall sentiment is positive. However, the MACD has reversed from bullish to bearish, which shows that current market sentiment in this timeframe has turned negative.

Judge Analisa Torres has recently permitted Attorney John Deaton to file a motion to intervene in the ongoing SEC-Ripple lawsuit on behalf of a section of XRP holders. Judge Torres ruled that the said motion to intervene must be filed before April 19, following which any response papers can be filed by May 3.

As reported earlier, both Ripple and the SEC had written to Judge Torres, taking opposite positions on Deaton’s intended motion to intervene. Ripple had argued that “intervenors should be permitted to proceed with their motion to clarify” the issues improperly explained by the SEC’s amended complaint.

In a pre-motion letter, Deaton had said that XRP holders’ interests “are not adequately represented by either parties” and that the “holders of XRP cannot objectively rely on Ripple’s efforts” in the lawsuit.

The SEC had contended this by saying that if the court permits the intervention, then it would be logic-bound to allow all investors and interested members with differing viewpoints to intervene. It also noted that the intervention would “create an avalanche of claims and near-certainty of undue delay, complexity, and confusion.”

In response to this, Deaton claimed that the SEC’s response was “the most misleading letter that I’ve ever read submitted to a Court.” 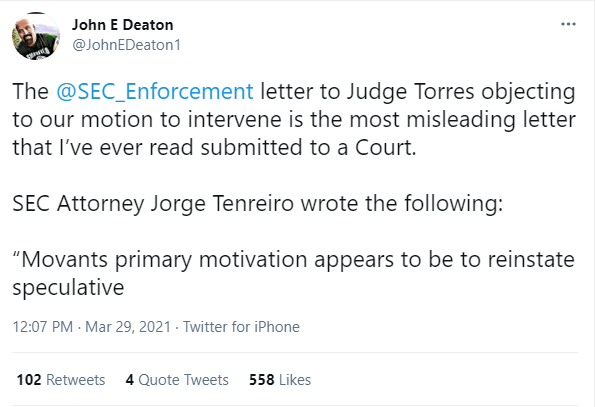 The @SEC_Enforcement letter to Judge Torres objecting to our motion to intervene is the most misleading letter that I’ve ever read submitted to a Court.

Ripple price will continue to struggle to break above the $0.57 resistance barrier.