Ripple slipped beneath $1 toward the end of last week. The downtrend extended to $0.9 before a recovery came into action. However, the trend reversal failed to close the gap to $1, leaving XRP in consolidation.

At the time of writing, the money transfer token is doddering at $0.95 while bulls deal with the short-term hurdle at the 50 Simple Moving Average (SMA). Marginally beneath the market value, the 100 SMA provides support, ensuring that bearish advances on XRP are kept at bay.

Network growth is an on-chain metric developed by Santiment. The model tracks new or unique addresses created and involved in transactions on the protocol. Typically the chart highlights the project’s adoption over some time. Moreover, it points out whether the token is gaining or losing traction.

When an asset’s network growth is consistent, in other words, the number of newly created addresses is increasing; the price tends to rise loyally with it.

On the other hand, diminishing network growth is a bearish signal. It shows that the digital asset does not have the willpower to proceed with the uptrend, hinting at a potential breakdown.

As for Ripple, the network growth model has been on a persistent decline in the last 30 days. Following a high of 7,920, the number of addresses created on the XRP Ledger has dropped to 2,400. This figure is significantly low and may not support the anticipated recovery. Therefore, XRP may dip again or remain pivotal between $0.9 and $1, respectively.

The number of active addresses interacting on the protocol daily has also gone down significantly, as shown by the data presented by Santiment. Note that the 24-hour active addresses metric tracks the unique addresses involved in XRP transactions daily. The model provides insight into the daily level of crowd speculation. A decline in the metric is a bearish signal, suggesting that few people are betting on the price gaining ground in the near term.

The four-hour chart reveals the formation of an ascending triangle pattern. As the Ripple traders a higher low pattern, it gets closer to a 34% breakout. A final break above the horizontal resistance (x-axis) will validate the upswing. 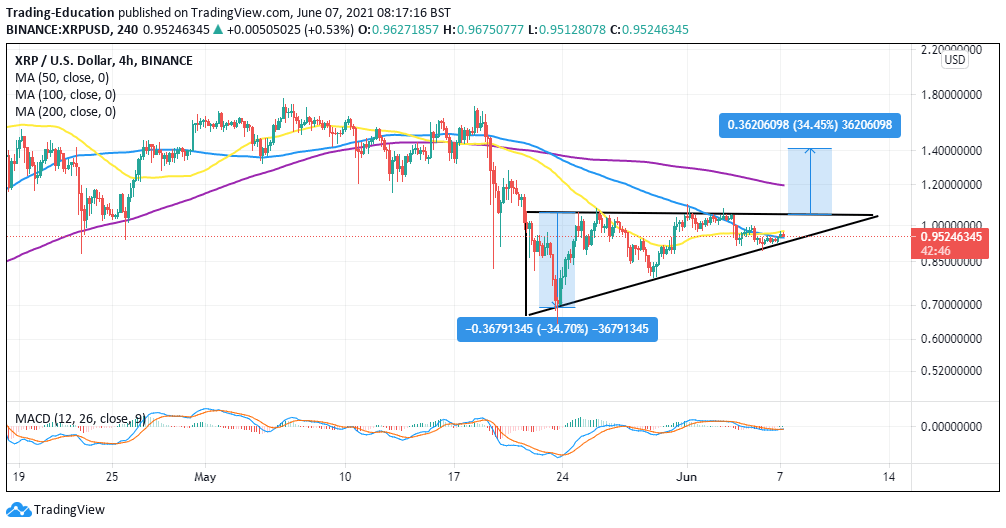 Ascending triangles are highly bullish chart patterns. Hence, Ripple investors have something to look forward to despite the mundane price action at the moment.