Ripple seemed to have settled at $1.12 last week following a rejection from $1.2. The weekend session was characterized by increased overhead pressure affecting all the crypto assets literally. Another freefall ensued, sending the cross-border cryptocurrency beneath $1. The bearish leg extended toward $0.6, but buyers secured seemingly robust support at $0.7.

It is apparent that recovery will come as quickly as investors would wish. The support at $0.7 might have halted the breakdown, but the technical picture does not seem strong enough. At the time of writing, Ripple is trading at $0.78 amid the persistent push by the bulls for gains eyeing $1.

The four-hour chart shines a light on a developing bullish narrative based on the Relative Strength Index (RSI). Following the dip to $0.7, the trend strength grinds toward the mean midline, thus validating the uptrend.

A comprehensive study of the Moving Average Convergence Divergence (MACD) hints at the trend gaining strength. In addition to starting the rebound toward the mean line, the MACD line (blue) is about to cross above the signal line, a move that may trigger massive buy orders. 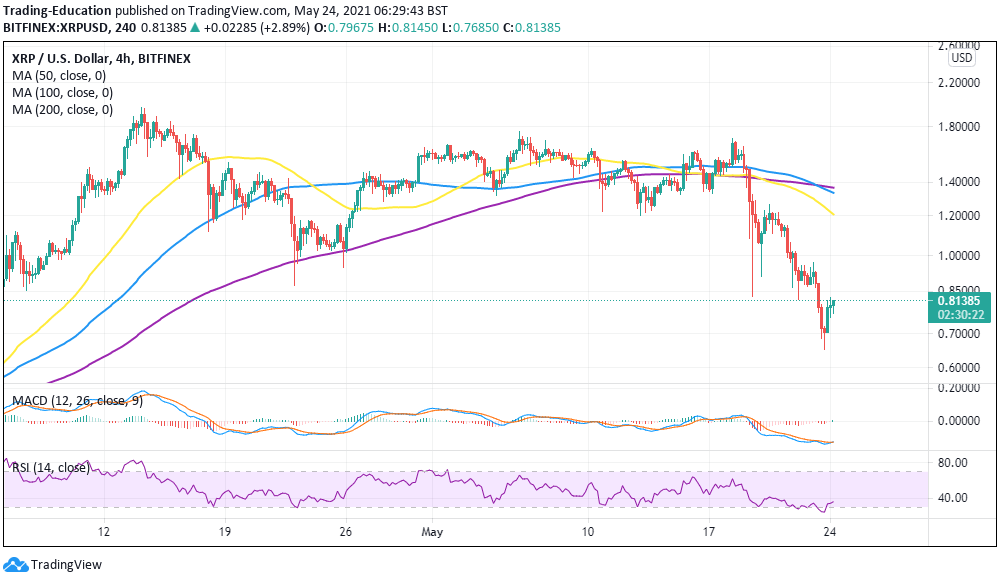 The profit or loss ratio on-chain model, otherwise known as the MVRV, continues to drop with no signs of recovery. According to Santiment, this model tracks the holders of XRP tokens that moved in the last 30 days compared with the price at which each token moved last.

An MVRV ratio of less than zero indicates that most holders are at a loss. Precisely XRP has a ratio of -42%, implying that XRP is in the buy zone, but recovery is hampered due to the weak technical levels. Therefore, the price may continue to drop in the near term until the model makes a confirmed reset.

The declining network growth has emphasized Ripple's bearish outlook. As the number of newly created addresses decreases, Ripple finds it challenging to sustain an uptrend. Note that this scenario interferes with the regular inflow and outflow of tokens on the network. An average of 4,400 addresses joined the XRP Ledger on May 23 from a 30-day high of 7,920.

A confirmed break above $0.8 would change investors' perspective, thus encouraging most of them to return to the market or increase their stakes keeping in mind that XRP is in the buy zone.