Between June 23 and June 30, the Ripple price jumped up from the $0.545 support wall and reached $0.706. During this upward climb, XRP has met constant resistance at the 200-day SMA. On the downside, Ripple has healthy support at $0.545, which coincides with the lower Bollinger Band.

Ripple Price Falls After Meeting Resistance At The 20-day SMA

Since July 1, The Ripple price has been hovering between $0.70 and $0.66. Looking at the daily chart, XRP has met continuous resistance at the 200-day and 20-day SMAs. The Bollinger Band has started narrowing to show decreasing price volatility. 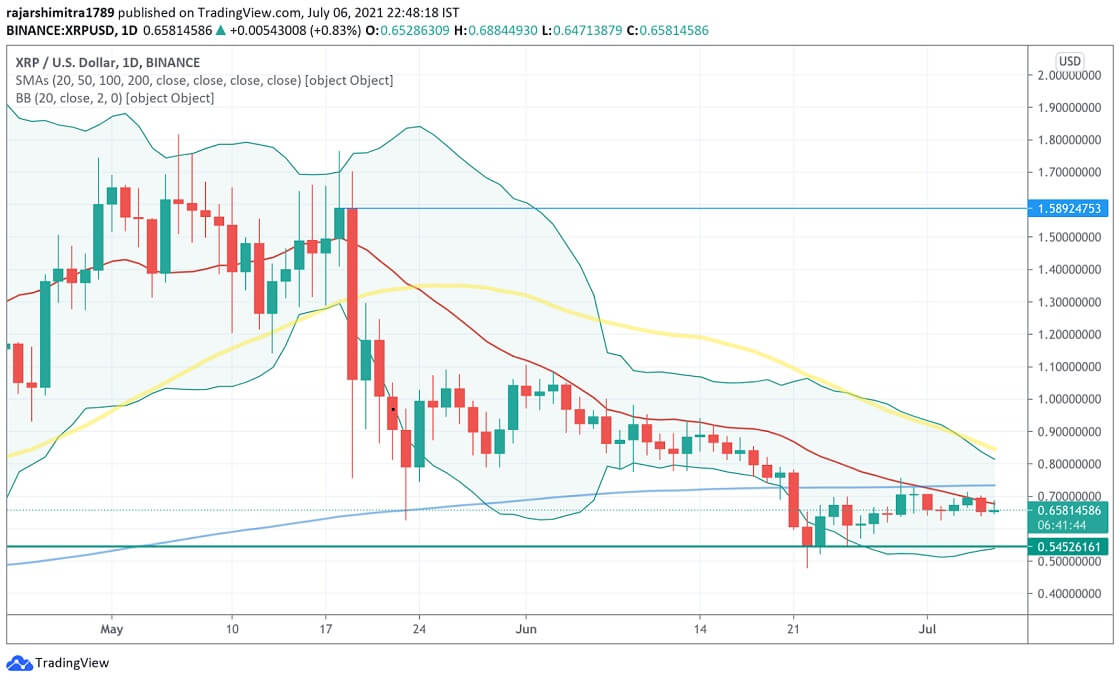 In the 4-hour time frame, the Ripple price had dropped from $0.707 to $0.65, reversing both the parabolic SAR and MACD from bullish to bearish. Since then, XRP has been hovering between the $0.65 support wall and the 20-bar and 50-bar SMAs.

Ben Armstrong: XRP ‘Is Going To Blast Off Toward the End of This Year’

Crypto analyst Ben Armstrong recently shared his views on XRP in a video titled “Bitcoin & XRP: 2 BEST Opportunities in Crypto." Ripple earlier announced that it has hired Sendi Young as Managing Director of its European operations. The firm added that Young would “oversee strategy and champion the expansion of Ripple’s global financial network technology, RippleNet, which delivers financial solutions that enable customers to easily run and scale their business.” Pointing to this, Armstrong said that Ripple "is continuing to make moves."

The analyst mentioned that XRP is “going to crush it this year.” For those people who are not “philosophically opposed to the centralized banker coin," XRP is “offering an incredible opportunity," he noted.

According to Armstrong’s sources, central banks seem to be getting ready to use XRP once the Ripple-SEC lawsuit has been “cleared away.” On March 3, Ripple said in a blog post that it is “piloting” a private version of the open-source public XRP Ledger (XRPL) to allow central banks to create and manage their own digital currencies.

The XRP Ledger was created in 2012 by David Schwartz, Jed McCaleb, and Arthur Britto, and XRP is the native currency of the XRP Ledger. Ripple mentioned that more than 80% of the world’s central banks are “actively exploring some form of sovereign-backed cryptocurrency”, and that eventually there would be a wide range of central bank digital currencies (CBDCs).

The firm went on to say that existing public blockchains cannot meet the needs of CBDCs since “a Central Bank requires more transaction privacy and control over its currency than a public ledger can offer." This means that it is “most likely opt to create a CBDC on a private ledger that can also operate at the required scale.”

The Ripple price has been consistently blocked by the 20-day SMA. If XRP doesn’t fail to break this level, it will drop to the $0.545 support wall.