Ripple is on the brink of lifting above $0.9 in the wake of support at $0.8. The uptrend is also closing in on a potentially massive technical breakout to highs above $1. As technical levels improve and align for a perfect upswing, investor speculation is bound to increase. Besides, the profit or loss ratio on-chain metric shows XRP is in a buy zone and setting up for a rally.

Ripple consolidates ahead of the much-awaited breakout

The cross-border money transfer token has formed a symmetrical triangle on the four-hour chart. This technical pattern tends to have both bearish and bullish impulses. Therefore, for traders to make the most out of it, the direction of the breakout has to be confirmed.

A symmetrical triangle pattern is created using two trend lines, connecting a series of lower highs and higher lows. The lines are expected to meet at a relatively equal point. As the pattern narrows, Ripple goes through a consolidation period.

A bullish signal occurs when the price cracks the upper trendline resistance. Such a move sets the precedence for a bullish breakout accompanied by a considerable volume. Triangle breakouts usually have precise targets that are equal to the distance between the highest to lowest points. For example, Ripple price might rally 47% to $1.34 if the price lifts above the symmetrical triangle. 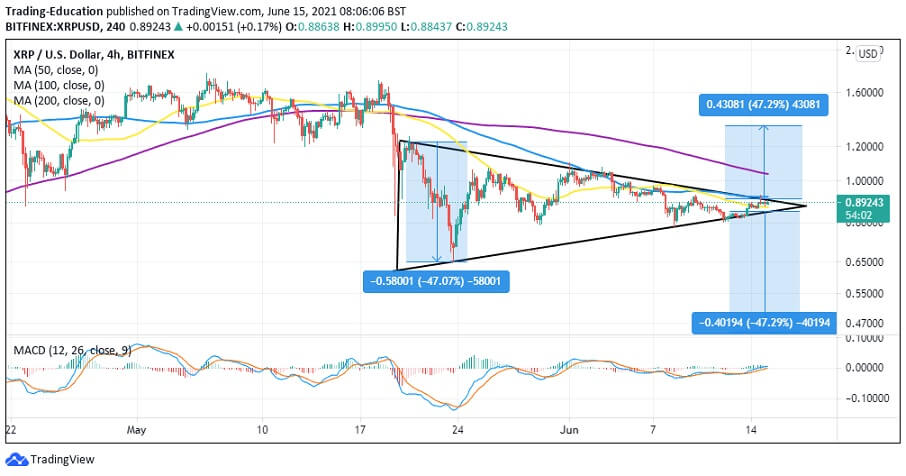 A buy signal is present on the four-hour chart, as presented by the SuperTrend indicator. This technical indicator follows the trend of an asset and reveals positions investors can either short or long an asset.

When the SuperTrend turns green from red and flips below the price, investors are compelled to buy. A sell signal flashes when the indicator turns red and moves above the asset's current market price.

The market value realized value (MVRV) model by Santiment shows that Ripple price is in a buy zone. In other words, buying XRP at the prevailing price could yield significantly in the near term. Note that the MVRV measures the profit or loss ratio of the holders of XRP tokens moved in the last 30 days and analyzes them based on the price at which each token last moved.

A low MVRV ratio such as -40 shows extreme losses experienced by the investors. Here, there is less selling pressure because holders do not wish to sell at a loss. As the MVRV ratio increases, more buyers are called into the market, adding to the tailwind, which paves the way for a rally.