Ripple Price Forecast: XRP Bulls Run Out of Options as Breakdown to $0.8 Looms

Ripple had on Thursday flipped bullish, following the paralyzing losses in the cryptocurrency market toward the end of Wednesday. The Asian session on Thursday was characterized by bloody price actions, but bulls came up against all odds to post gains above $1. This bullish leg was later extended to levels marginally above $1.2.

At the time of writing, Ripple has corrected from the barrier at $1.2 and is trading at $1.12. The general trend of the market is downward, as reinforced by the Moving Average Convergence Divergence (MACD) indicator.

In addition to the trend momentum indicator sticking to the negative region, the MACD line has not crossed above the signal line. As long as this negative divergence exists, the trend will favor the bears.

Consequently, the Relative Strength Index (RSI) has a bearish outlook. The recovery described on Wednesday faded at the 40, cutting short the expected rally to the midline. The ongoing movement toward the oversold region has validated sell orders. If overhead pressure rises, Ripple will be forced to explore levels toward $1 and $0.8, respectively. 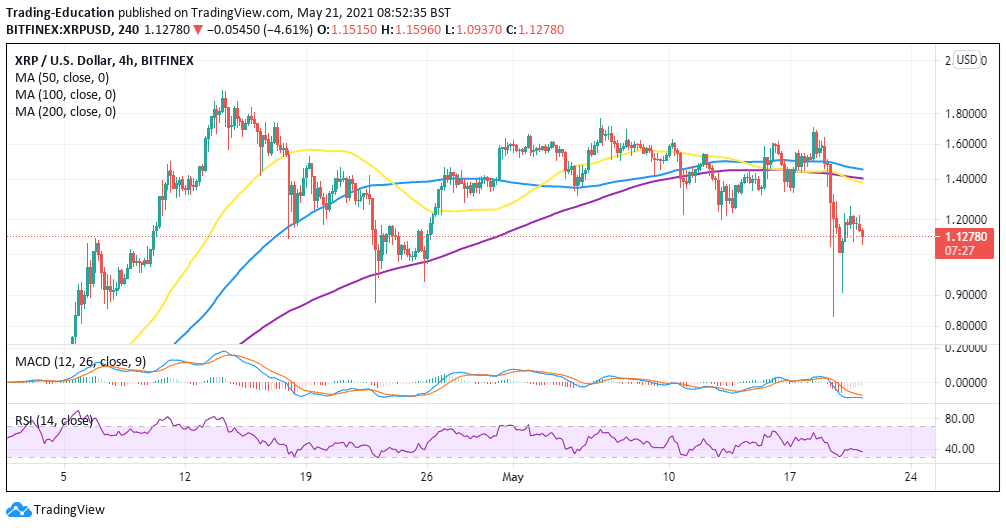 Intriguingly, Ripple’s network activity is soaring as the price drops. Usually, increases in active addresses lead to a spike in the price. It is worth mentioning that an uptick in the number of addresses interacting on the network leads to a surge in speculation. In other words, if this network activity is sustainable, the sluggish price action will eventually gain traction to scale higher levels toward $2.

The network growth model by Santiment signals a potential recovery. This metric shows the number of addresses joining the XRP Ledger. For nearly a month, these addresses dropped significantly, putting a lot of pressure on the bulls amid the effort to defend price action toward $2.

According to the on-chain metric, the addresses joining the network seem to have bottomed roughly at 5,200. A recovery is underway, as observed on the chart. If the uptrend holds, we anticipate XRP to acclimate to bullish advances, riding on improving inflow and outflow of tokens.