Ripple Price Forecast: XRP Could Plunge 38% to $0.5 Following the Consolidation

Ripple’s slugging price action leaves it in a no-trade zone, especially when considering the four-hour timeframe. The token’s upside has been capped under $0.9, while the downside is protected at $0.8.

A critical technical formation on the four-hour chart hints at the sideways price action culminating in a massive downswing to $0.5.

A descending triangle is a vivid bearish formation on the chart. However, it has to meet two conditions: a trend line connecting a series of lower highs and a horizontal line liking two or more relatively equal lows.

As the two trend lines narrow, Ripple is expected to consolidate. The x-axis shines a light on a firmer bullish grip, able to sustain the support at $0.8. However, the upper trend line reveals that bears are getting stronger by the day. The descending triangle is confirmed when the price finally breaks under horizontal support.

A large volume erupts to affirm the breakout, marking the beginning of a downtrend. Ripple will likely stretch the bearish leg 38% lower to trade at $0.5 before another recovery occurs. It is essential to wait for the breakout confirmation before going all-in on the breakdown price action. 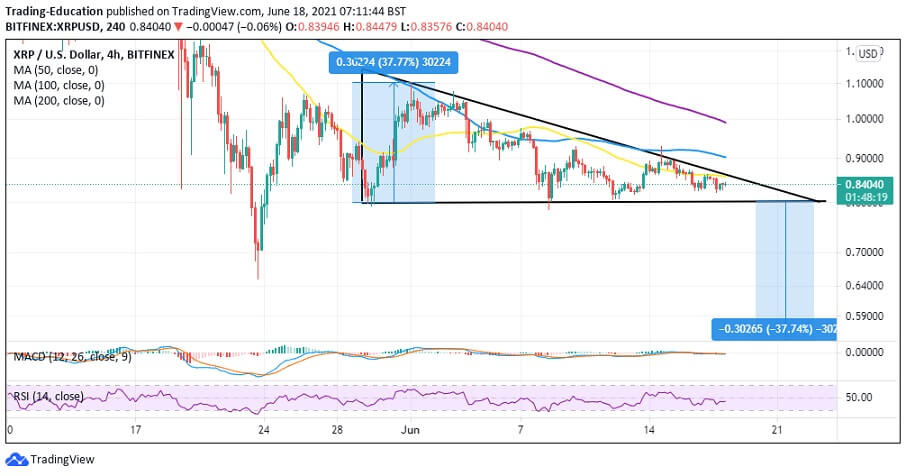 It is worth mentioning that the sideways trading has been validated by both the Moving Average Convergence Divergence (MACD) and the Relative Strength Index (RSI) on the four-hour chart. The former levels at the zero line while the latter at 44 after failing step above the midline.

Ripple price faces immense resistance in its quest to achieve higher levels like the 50 Simple Moving Average (SMA), the descending trendline, and the 100 SMA, currently holding at $0.9.

A massive drop in the number of addresses joining the XRP Ledger is a bearish signal. The network growth on-chain metric by Santment shows that only 2,420 new addresses joined the protocol on June 17 compared to the 30-day high of 6,127. Realize that this drop has been consistent over the last couple of months.

Declining network growth is a bearish signal for both the project and the token value. The project loses traction in mainstream adoption while Ripple’s ability to sustain an uptrend curtailed.