Ripple bulls flexed their muscles after the massive dip to $0.52 early last week. Initially, it was challenging to break above the resistance at $0.7, leading to sluggish price action around $0.65. However, the last couple of days yielded remarkably for XRP as bulls jumped above $0.7 to trade weekly highs at $0.72.

The resistance at this level had been emphasized by the 100 Simple Moving Average (SMA) on the four-hour chart. At the time of writing, Ripple trades at $0.67 after correcting under $0.7. Higher support, preferably at $0.64.

Despite the ongoing correction, Ripple’s on-chain metrics are improving by the day, affirming that this is a potential entry position for investors speculating that the price will hit $1 in the near term.

Santiment, a leading on-chain analytics platform, shows that the market value realized value (MVRV) ratio has recovered from the 30-day bottom of nearly -40% but is still significantly under zero. The MVRV tracks the profit or loss ratio of the holders of XRP tokens moved in the last 30 days and analyzed against the price at which each of the tokens last moved.

Ripple MVRV has a buy signal

A low ratio around zero or below is a massive bullish signal because it reveals most investors are at a loss and unlikely to sell until Ripple price recovers. With the current ratio of -21%, overhead pressure is bound to diminish in the near term as more investors stream into the market, thereby catapulting XRP toward $0.7.

Following Ripple price freefall to $0.52, a reflex recovery pulled the price above $0.6. As the price recovered, more investors joined the XRP Ledger, creating new addresses. Note that the number of unique addresses joining the protocol soared from a 30-day low of 1,596 but topped out at 3,148. If this metric keeps growing, Ripple price will gradually gain momentum for gains eyeing $1.

The short-term technical outlook shows that Ripple must hold support at $0.65 and renew the uptrend. This follows a bullish signal from the Moving Average Convergence Divergence (MACD) indicator, which seems to have settled above the zero line. 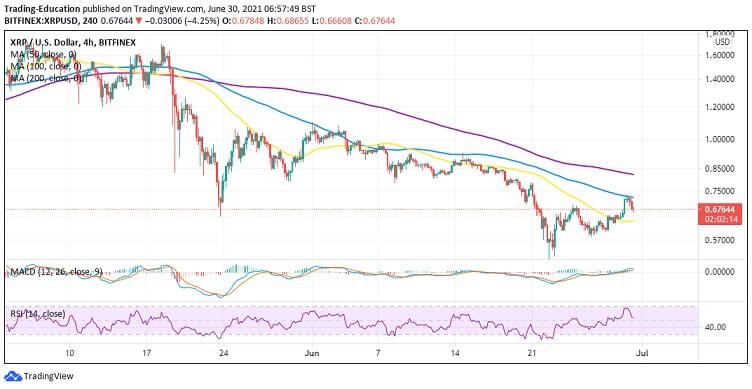 Moreover, the Relative Strength Index (RSI) shows that bears could be getting exhausted. Note that the RSI is pointing north after closing the gap to the midline. A movement toward the overbought will call more buyers into the market.