The non-fungible token (NFT) marketplaces rose to stardom in the first quarter of 2021, with artists like Beeple making millions of dollars. NFTs became the sort of after newsmaker, bringing forth some of the biggest stories.

However, the dramatic rise of the NFT sector continues to diminish amid the expensive and challenging process of transferring ownership. In light of these difficulties, Ripple announced that it is entering the sector, aiming to lower the gas fees.

The blockchain startup’s idea is to integrate the NFT marketplaces on the XRP Ledger (XRPL). According to Ripple, the development will benefit both buyers and sellers by introducing a cost-effective way to interact in the marketplaces.

Subsequently, Ripple will seize the opportunity to advocate for energy-efficient systems as its XLP Ledger uses a fraction of the proof-of-work (PoW) consensus consumption. A statement by Ripple says:

“Because the XRPL uses a novel consensus process for validating transactions, it consumes negligible amounts of energy and is 120,000x more efficient than proof-of-work networks. Building on the XRP Ledger provides developers a unique opportunity to run more sustainable NFT apps and marketplaces while eliminating a heavy burden for the planet.”

Ripple poised for another explosive rally

Ripple has affirmed the break above $1 in the wake of Tuesday’s correction to $0.9. The news that the blockchain company is entering the NFT has evoked interest among investors. XRP trades at $1.06 while bulls deal with the 50 Simple Moving Average (SMA) barriers.

All the technical indicators seem to be aligning for the ultimate upswing toward $2. For instance, the Relative Strength Index (RSI) on the four-hour chart closes the gap toward the overbought area. The continuous movement from the midline hints at a firmer bullish grip.

The Moving Average Convergence Divergence (MACD) has a vivid bullish impulse. Following the MACD line (blue) cross above the signal line, the indicator moved closer to the mean line (0.00). A break into the positive region may trigger more buy orders as speculation soars for gains eyeing $2. 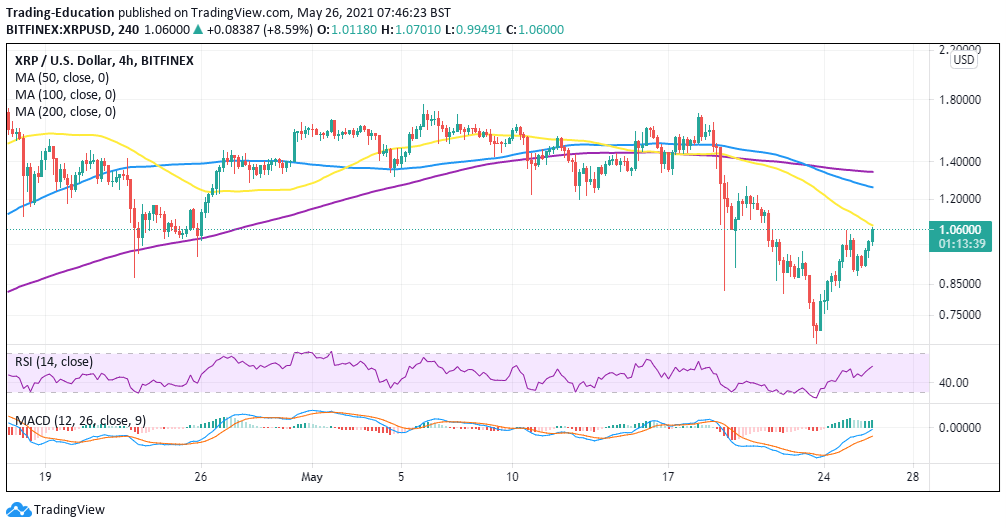 Buyers must crack the hurdle at the 50 SMA to ascertain the uptrend. On the downside, support at $1 has to hold to keep the focus on higher levels. Note that if the immediate support shatters, XRP will explore areas toward $0.9. Other vital levels to keep in mind include $0.8 and $0.65.